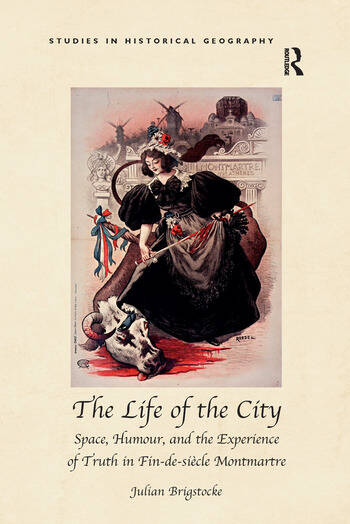 The Life of the City: Space, Humour, and the Experience of Truth in Fin-de-siècle Montmartre

Could the vitality of embodied experience create a foundation for a new form of revolutionary authority? The Life of the City is a bold and innovative reassessment of the early urban avant-garde movements that sought to re-imagine and reinvent the experiential life of the city. Constructing a ground-breaking theoretical analysis of the relationships between biological life, urban culture, and modern forms of biopolitical ’experiential authority’, Julian Brigstocke traces the failed attempts of Parisian radicals to turn the ’crisis of authority’ in late nineteenth-century Paris into an opportunity to invent new forms of urban commons. The most comprehensive account to date of the spatial politics of the literary, artistic and anarchist groups that settled in the Montmartre area of Paris after the suppression of the 1871 Paris Commune, The Life of the City analyses the reasons why laughter emerged as the unlikely tool through which Parisian bohemians attempted to forge a new, non-representational biopolitics of sensation. Ranging from the carnivalesque performances of artistic cabarets such as the Chat Noir to the laughing violence of anarchist terrorism, The Life of the City is a timely analysis of the birth of a carnivalesque politics that remains highly influential in contemporary urban movements.

Contents: Preface; Introduction: art, life, and the experience of modernity. Part I The Life of the City: Anomalous and inhuman: black cats and the experience of truth in Baudelaire, Manet and Poe; Order and progress: crises of authority and the pursuit of experience in the early Third Republic; Upsetting the festival of life: humour and the politics of ressentiment. Part II The Chat Noir: Defiant laughter: humour and the aesthetics of place; Counter-display and the exhibition of error; The silent horror of the night: supernatural landscapes and the life of the senses. Part III Anarchism, Humour and Violence: Kings of derision: anarchist laughter and the aesthetics of violence; Conclusion: literature, performance, and the aesthetics of authority. References; Index.

Dr Julian Brigstocke is Lecturer in Human Geography at the School of Geography, Earth and Environmental Sciences, Plymouth University, UK.

’Never has the relationship between power and authority been so complex. With the idealism of fin-de-siècle Montmartre as a touchstone, Julian Brigstocke offers an inspiring account of new forms of experiential authority in the modern city. This book radically reassesses the political relationship between art and life in ways that are urgent, immediate and contemporary.’ Helen Nicholson, Royal Holloway, University of London, UK ’Julian Brigstocke’s The Life of the City is a path-breaking work that brings to our attention the important counter-culture of Montmartre’s fin-de-siècle cabaret scene. In the years after the Commune this pre-eminent contested space of anarchist politics and cultural innovation brought to life a new expression of authority that emphasised the importance of embodiment, vitality and affect against established bourgeois norms. Weaving together important historical research with the latest geographical thinking around non-representational approaches and the importance of affect, Brigstocke’s book is an important event in cultural understanding. Through this study we learn a great deal about the character of urban modernity and the challenges to forms of modern capitalist spectacle that have been there from the outset. This book will prove essential reading for all those interested in the city.’ Kevin Hetherington, The Open University, UK 'Brigstocke provocatively analyses the contradictory dynamics of the Montmartre avant-garde community and shows how humor was used to contest traditional and scientific forms of authority and work against prevailing modes of subjectivation.' H-France 'Using humour, laughter, and violence as his focus, Brigstocke provides an insightful and compelling account of how the transformation that Paris experienced during the second half of the nineteenth century was seen and perceived from the heights of Montmartre. ...' Journal of Historical Geography

The Life of the City: Space, Humour, and the Experience of Truth in Fin-de-siècle Montmartre