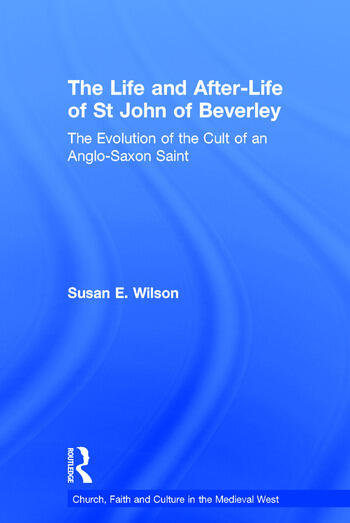 The Life and After-Life of St John of Beverley: The Evolution of the Cult of an Anglo-Saxon Saint

This represents the first study devoted to the life and after-life of St John of Beverley. John was bishop of Hexham and then York, after which he retired to his own monastery in Beverley and was buried there in 721. His cult was quickly established and spread to attract pilgrims from all over the British Isles, and even Europe. It was also established in Brittany by the tenth century, especially in the town of Saint-Jean-Brévelay, which is named after him. The great economic wealth of Beverley in the Middle Ages was largely due to it being a major ecclesiastical centre focused around John's relics. His reputation as a powerful saint was harnessed not only to protect Beverley and the surrounding areas and to give succour to pilgrims to his shrine, but also to further the ambitions of successive kings of England to the extent that Henry V raised him to the status of a patron saint of England following the battle of Agincourt, which was fought on the feast day of St John's translation. The hagiographic works on John extend over nearly six hundred years from that written by Bede c. 731, the Vita Sancti Johannis composed by a monk called Folcard c. 1066, then four separate collections of post-mortem miracle stories of the eleventh-thirteenth centuries, and a number of miracles recorded in the fourteenth and fifteenth centuries. This span is greater even than the hagiography relating to St Benedict, which had been believed to cover more years than any other collection in Europe. Dr Wilson uses these sources as a unique opportunity to examine the ways in which an Anglo-Saxon saint was promoted over a long period of time by different hagiographers, and how the saint was continually re-created in the image which the hagiographers or his community required, depending on their current needs and perceptions. The volume also includes the first English translations of the Life and the miracle stories.

Susan E. Wilson is Visiting Fellow at the University of Southampton, UK.

'A major new study of a neglected saint that places John of Beverley and his post-mortem miracles into the historical contexts which produced them. Translations are provided of all the texts associated with the saint including the important, but little known, post-Conquest miracles with their fascinating insights into everyday life and beliefs. A most welcome and accomplished addition to studies of medieval saints' cults.' Professor Barbara Yorke, University College, Winchester, UK 'Wilson's meticulous research and well-crafted prose have issued in a useful compendium that will serve as a starting point for all future work on this important northern English saint and his cult.' Church History 'In every respect this is a useful, well-written volume.' English Historical Review ’This is a worthwhile contribution to the study of hagiography.’ TOEBI Newsletter ’What is here is more than enough to get anyone started on this interesting journey into both Anglo-Saxon and later medieval hagiography.’ Journal of British Studies ’Wilson provides a useful analysis of the evolution of the cult through an analysis and comparison of the differing Latin texts and their dependency on changing fashions in hagiographic representation... Wilson's Latin translation is very readable, particularly her translation of Ketell's vivid narrative, and the bibliography is useful.’ Speculum ’... ce livre de Susan E. Wilson est une monographie qui fait utilement le point sur un dossier hagiographique négligé et qui a l'intérÃªt de mettre au jour des documents peu connus...’ Cahiers de civilisation médiévale

The Life and After-Life of St John of Beverley: The Evolution of the Cult of an Anglo-Saxon Saint