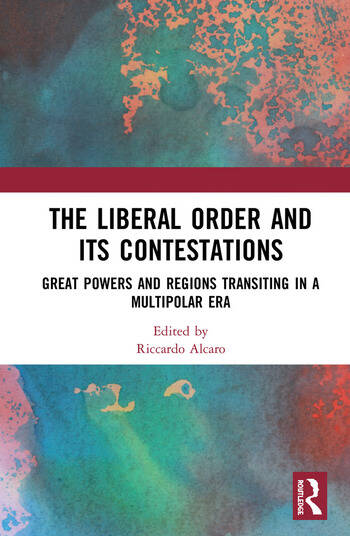 The Liberal Order and its Contestations: Great powers and regions transiting in a multipolar era

The notion that we are experiencing a change in times, whereby an old global order is giving way to a new one, has been gaining legitimacy in international debates. As US power is waning, the argument goes, so is the set of liberal norms, rules and institutions around which the Unites States organised its global supremacy. Ideational contests, power shifts, regional fragmentation, and socio-economic turmoil paint a broad picture of complex and often inter-related challenges that fuel contestation of the liberal order, both as a normative project and as an emanation of US power. Major players – China and India, Europe and Russia, and the United States itself – are all engaged in a process of global repositioning, most notably in areas where the liberal project has only fragile roots and order is contested: Eastern Europe and the Caucasus, the Asia-Pacific and the Middle East. This volume aims to provide critical frames of reference for understanding whether geopolitical and ideational contestations will eventually bring the US-centred liberal order down or lead to a process of adjustment and transformation.

The chapters in this book were originally published in a special issue in The International Spectator.

1. The Liberal Order and its Contestations. A Conceptual Framework

2. Diversity Management: Regionalism and the Future of the International Order

3. Present at the Destruction? The Liberal Order in the Trump Era

4. The EU and the Global Order: Contingent Liberalism

8. From an Area of Contestation to a Contested Area: The Liberal International Order in Eastern Europe and the South Caucasus

9. The Middle East’s Troubled Relationship with the Liberal International Order

10. Order and Contestation in the Asia-Pacific Region: Liberal vs Developmental/Non-interventionist Approaches

11. Contestation and Transformation. Final Thoughts on the Liberal International Order

Riccardo Alcaro is Research Coordinator and Head of the Global Actors Programme at the Istituto Affari Internazionali of Rome, Italy. He has been a Visiting Fellow at the Brookings Institution, Washington, DC, and is a European Foreign and Security Policy Studies Fellow. He holds a PhD from the University of Tübingen, Germany.

The Liberal Order and its Contestations: Great powers and regions transiting in a multipolar era