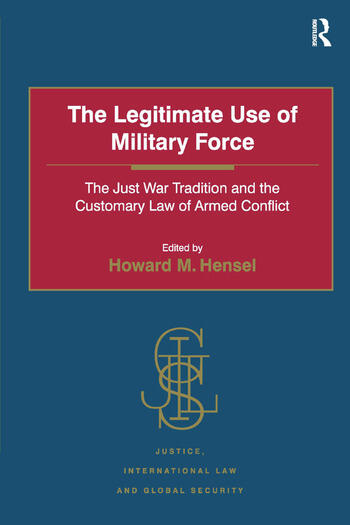 The Legitimate Use of Military Force: The Just War Tradition and the Customary Law of Armed Conflict

Throughout human history, scholars, statesmen and military leaders have attempted to define what constitutes the legitimate use of armed force by one community against another. Moreover, if force is to be used, what normative guidelines should govern the conduct of warfare? Based upon the assumption that armed conflict is a human enterprise and therefore subject to human limitations, the Western 'just war tradition' represents an attempt to provide these guidelines. Following on from the success of Hensel's earlier publication, The Law of Armed Conflict, this volume brings together an internationally recognized team of scholars to explore the philosophical and societal foundations of just war tradition. It relates the principles of jus ad bellum to contemporary issues confronting the global community and explores the relationship between the principles of jus in bello and the various principles embodied in the customary law of armed conflict. Applying an interdisciplinary approach to analyzing and assessing the links between just war and the norms of behaviour, the book provides a valuable contribution to international law, international relations and national security studies.

Dr Howard M. Hensel has been a Professor on the faculty of the Air War College since 1986 and currently serves as the Director of Foundations of Warfighting Strategy.

'At a time when the potential triggers for military action seem to proliferate, it is imperative to take a serious critical look at the philosophical and legal perspectives that have shaped our understanding of the legitimacy of the resort to force, as well as of the nature of the constraints that govern its use. This collection of essays offers much needed analytical insights into these issues, insights that will enrich the debates among academic as well as policy making circles.' George Andreopoulos, City University of New York, USA ’With this invaluable edited collection of essays Howard Hensel adds to his reputation as a distinguished interpreter of just war thinking and international humanitarian law, and their application to current problems. For both specialist and practitioner this learned and comprehensive volume is of great help in clarifying the links between law, morality and war.’ Richard Falk, Princeton University and UCSB, USA '...Hensel makes the point that the main issue is to know to what extent international humanitarian law can influence the law of contemporary warfare. Even though the work is far from being exhaustive on the subject, it allows the reader to grasp the key issues.' Etudes Internationales

The Legitimate Use of Military Force: The Just War Tradition and the Customary Law of Armed Conflict