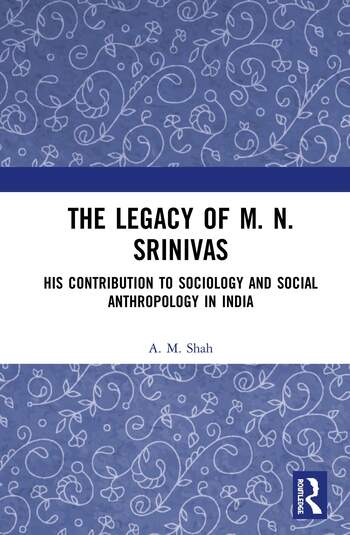 The Legacy of M. N. Srinivas: His Contribution to Sociology and Social Anthropology in India

M. N. Srinivas is acclaimed as a doyen of modern sociology and social anthropology in India. In this book, A. M. Shah, a distinguished Indian sociologist and a close associate of Srinivas’s, reflects on his legacy as a scholar, teacher, and institution builder.

The book is a collection of Shah’s five chapters on and an interview with Srinivas, with a comprehensive introduction. He narrates Srinivas’s life and work in different phases; discusses his theoretical ideas, especially functionalism, compared with Max Weber’s ideas; deliberates on his concept of Sanskritisation and its contemporary relevance; and reflects on his role in the history of sociology and social anthropology in India. In the interview, Srinivas responds to a large number of questions from the style of writing to the dynamics of politics. It shows that while his scholarship was firmly rooted in India, it was sensitive to global ideas and institutions.

This book will be an essential read for scholars and researchers in sociology, social anthropology, history, and political science. The general reader interested in these subjects will also find it useful.

5. An Interview with M.N. Srinivas

A. M. Shah is former Professor of Sociology at the Delhi School of Economics, University of Delhi, and National Fellow of the Indian Council of Social Science Research, New Delhi, India. Felicitated with the Lifetime Achievement Award by the Indian Sociological Society in 2009, he has also been the recipient of the Swami Pranavananda Award from the University Grants Commission and the Distinguished Service Award from the University of Delhi. He has held fellowships at the University of Chicago; the Centre for Advanced Study in the Behavioural Sciences, Stanford; the Institute of Development Studies, Sussex, UK; and the University of New England, Australia. He has authored and edited many books, including The Household Dimension of the Family in India (1973); Division and Hierarchy (authored with I. P. Desai (1988); The Family in India: Critical Essays (1998); Exploring India’s Rural Past (2002); The Writings of A. M. Shah: The Household and Family in India (an omnibus, 2014); and Sociology and History (2017); The Structure of Indian Society (2012, 2019). He has contributed extensively to academic journals and symposia, including ten articles in Gujarati. He has been honoured with a festschrift, Understanding Indian Society: Past and Present (2010), edited by B. S. Baviskar and Tulsi Patel.

The Legacy of M. N. Srinivas: His Contribution to Sociology and Social Anthropology in India