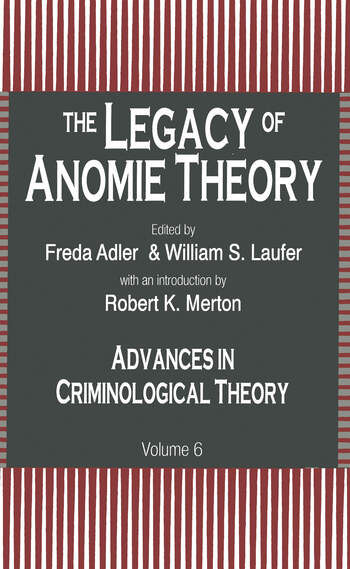 The Legacy of Anomie Theory

This sixth volume Advances in Criminological Theory is testimony to a resurgent interest in anomie-strain theory, which began in the mid-1980s and continues unabated into the 1990s. Contributors focus on the new body of empirical research and theorizing that has been added to the anomie tradition that extends from Durkheim to Merton. The first section is a major, 75-page statement by Robert K. Merton, examining the development of the anomie-and-opportunity-struc-ture paradigm and its significance to criminology.The Legacy of Anomie Theory assesses the theory's continuing usefulness, explains the relevance of Merton's concept of goals/means disparity as a psychological mechanism in the explanation of delinquency, and compares strain theory with social control theory. A macrosociological theoretical formulationis used to explain the association between societal development and crime rates. In other chapters, anomie is used to explain white-collar crime and to explore the symbiotic relationship between Chinese gangs and adult criminal organizations within the cultural, economic, and political context of the American-Chinese community.Contributors include: David F. Greenberg, Sir Leon Radzinowicz, Richard Rosenfeld, Steven F. Messner, David Weisburd, Ellen Chayet, Ko-lin Chin, Jeffrey Pagan, John P. Hoffmann, Timothy Ireland, S. George Vincent-nathan, Michael J. Lynch, W. Byron Groves, C. Ray Jeffery, Gilbert Geis, Thomas J. Bernard, Nikos Passas, Robert Agnew, Gary F. Jensen, Deborah V. Cohen, Elin Waring, and Bonnie Berry. The Legacy of Anomie Theory \s important for criminologists, sociologists, psychologists, and other professionals seeking to understand crime and violence in culture.

The Legacy of Anomie Theory