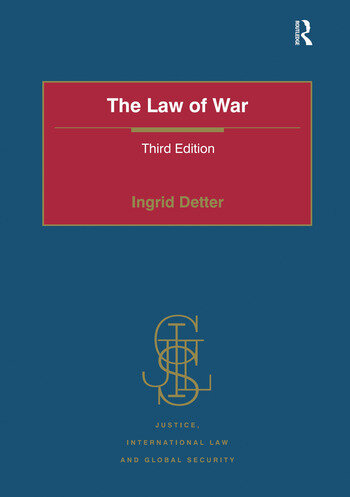 The Law of War

The third edition of Ingrid Detter's authoritative work explores the changing legal context of modern warfare in light of events over the last decade. Ingrid Detter reviews the status of non-State actors, as individuals and groups become more prominent in international society. Covering post 9/11 events and the resulting changes in the ethos of war, the author analyses the role of military companies and examines what their legitimacy means for international society. The edition also discusses certain ’intrinsic’ rules in the Law of War, such as rules giving individuals the right to be spared genocide, torture, slavery and apartheid and assure them basic democratic rights. The author questions the right of ’illegal’ combatants to be treated as prisoners of war and suggests that a minimum standard must be afforded to all, whether captured dictators or detainees suspected of terrorism. In the modern world, the individual (the soldier, the civilian, the dictator, the terrorist or the pirate) can no longer behave as they wish. Further new topics include 'target killings', the ’right to protect’ (’R2P’, - claimed to be a new form of intervention), the use of unregulated weapons such as drones and robots, the war scenario in Outer Space and cyber crimes. There is also a discussion of new developments in the field of war crimes including severe criticism of the novel concept 'joint criminal enterprise' (JCE), which, in the opinion of the author, undermines the Rule of Law. This updated and expanded edition will be of use to statesmen, scholars and students of international relations and international law.

'Comprehensive, updated, synthetic and original, these are, in a nutshell, the dominating qualities of this 3rd edition. The author manages to draw an accurate picture of the Law of War while succeeding in incorporating the basic rules of the jus ad bellum and aspects of the most contemporary issues in international criminal law. Such a book deserves to be in any library worthy of this name.’ Eric David, Prof. ém., Université Libre de Bruxelles, Belgium ’This new edition of The Law of War is a significant and updated contribution to the complete analysis on the applicable rules in the case of war. It is clearly structured and provides a comprehensive understanding of the rules that are related to armed conflicts, including new developments in the use of force against non-State actors, the use of certain weapons and international criminal law. Only few books provide such a clear and comprehensive consideration of the legal rules that apply in situations of armed conflict.’ Marco Odello, Aberystwyth University, UK 'Ingrid Detter’s book, The Law of War, is an extremely useful compendium to have on one’s shelf. This third edition represents a very substantial change from the previous two, well in keeping with the breathtaking transformation of the world since those were published: one in 1987 during the Cold War and the other in 2000. ... this book is an astonishingly comprehensive and extremely useful work of reference for lawyers, but also for decision-makers - military and civilian - at all levels, for journals and anybody else considering the laws of war, confronted with real issues in live situations and with the question of which laws apply to them.' The RUSI Journal

The Law of War