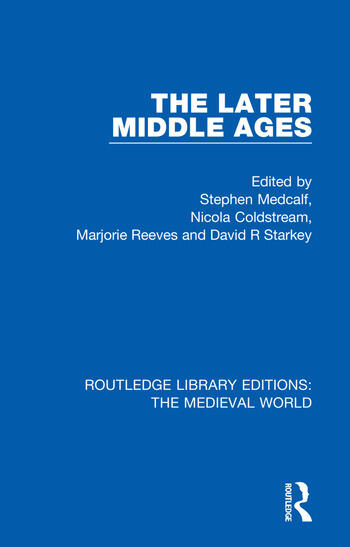 Originally published in 1981, The Later Middle Ages bridges the gap between modern and medieval language and literature, by introducing the social and intellectual milieu in which writers like Chaucer, Malory and Margery Kempe lived. It provides a unified and coherent account of the culture of late medieval England, and of the problems involved in viewing it, in relation to English literature. The book covers the history of ideas and education, art and architecture, and changes in the social, economic and political structure.

1 On Reading Books From a Half-Alien Culture, Stephen Medcalf

2. The Ideal, the Real and the Quest for Perfection, Marjorie Reeves and Stephen Medcalf

4. Art and Architecture in the Late Middle Ages, Nicola Coldstream