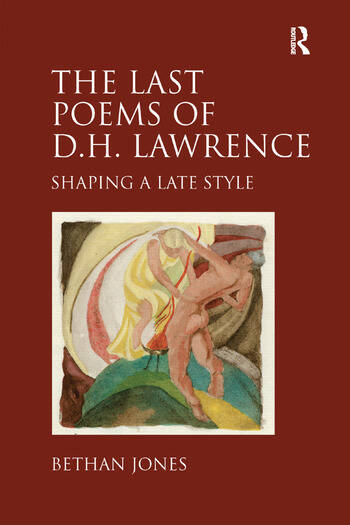 The Last Poems of D.H. Lawrence: Shaping a Late Style

In the first book to take D. H. Lawrence's Last Poems as its starting point, Bethan Jones adopts a broadly intertextual approach to explore key aspects of Lawrence's late style. The evolution and meaning of the poems are considered in relation to Lawrence's prose works of this period, including Sketches of Etruscan Places, Lady Chatterley's Lover, and Apocalypse. More broadly, Jones shows that Lawrence's late works are products of a complex process of textual assimilation, as she uncovers the importance of Lawrence's reading in mythology, cosmology, primitivism, mysticism, astronomy, and astrology. The result is a book that highlights the richness and diversity of his poetic output, also prioritizing the masterpieces of Lawrence's mature style which are as accomplished as anything produced by his Modernist contemporaries.

Contents: Foreword; Lawrence and late style; The 'nettles' and 'last poems' notebooks; Etruscan connections; Beyond the Chatterley machines; Elements of the pre-Socratics; All sorts of gods; Apocalyptic symbols; Ascension and carpentry; How to make an end; Bibliography; Index.

Bethan Jones is a lecturer in English at the University of Hull, UK.

Prize: Winner of The D.H. Lawrence Society of North America, Biennial Award to a Newly Published Scholar in Lawrence Studies 2011 'Meticulously researched and full of interesting insights, The Last Poems of D. H. Lawrence is an important contribution to Lawrence studies and to more general understandings of modernist poetics'. Sandra M. Gilbert, University of California, Davis, USA '[an] illuminating study...' Modern Language Review 'This welcome book is one I plan to reread. Involved in the late twentieth-century renaissance of Lawrence studies at the University of Nottingham and interested in Lawrence's complex verse manuscripts, Bethan Jones brings precise observation and apt interpretation to the poetry. This new study, moreover, takes up the least scoured period of Lawrence's career as a poet: 1927 through 1930. ... This major new book offers nothing less than a transformative re-vision of Lawrence.' D. H. Lawrence Review

The Last Poems of D.H. Lawrence: Shaping a Late Style