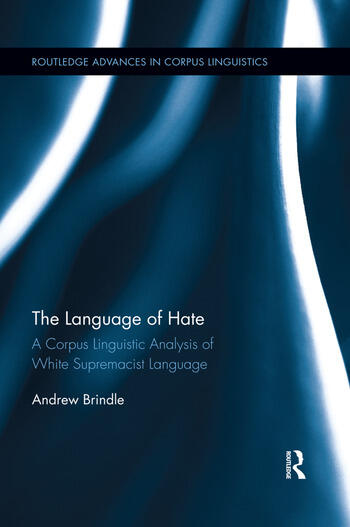 The Language of Hate: A Corpus Lingusitic Analysis of White Supremacist Language

In this book, Andrew Brindle analyzes a corpus of texts taken from a white supremacist web forum which refer to the subject of homosexuality, drawing conclusions about the discourses of extremism and the dissemination of far-right hate speech online. The website from which Brindle’s corpus is drawn, Stormfront, has been described as the most powerful active influence in the White Nationalist movement (Kim 2005). Through a linguistic analysis of the data combining corpus linguistic methodologies and a critical discourse analysis approach, Brindle examines the language used to construct heterosexual, white masculinities, as well as posters’ representations of gay men, racial minorities and other out-groups, and how such groups are associated by the in-group. Brindle applies three types of analysis to the corpus: a corpus-driven approach centered on the study of frequency, keywords, collocation and concordance analyses; a detailed qualitative study of posts from the forum and the threads in which they are located; and a corpus-based approach which combines the corpus linguistic and qualitative analyses. The analysis of the data demonstrates a convergence of reactionary responses to not only women, gay men and lesbians, but also to racial minorities. Brindle’s findings suggest that due to the forum format of the data, topics are discussed and negotiated rather than dictated unilaterally as would be the case in a hierarchical organization. This research-based study of white supremacist discourse on the Internet facilitates understanding of hate speech and the behavior of extremist groups, with the aim of providing tools to combat elements of extremism and intolerance in society.

2 Setting the Scene: What We Already Know

3 Approaching the Problem: Studying Hate on the Internet

Andrew Brindle is Assistant Professor at St. John’s University, Taiwan, in the Department of Applied English.His research interests include gender and masculinities, right-wing populist discourse, discourses of racism and homophobia, and political discourse. He has recently published work on the media constructions of a democracy movement in Taiwan and a study investigating the discursive constructions of a far-right Islamophobic street protest group in the U.K., the EDL.

The Language of Hate: A Corpus Lingusitic Analysis of White Supremacist Language