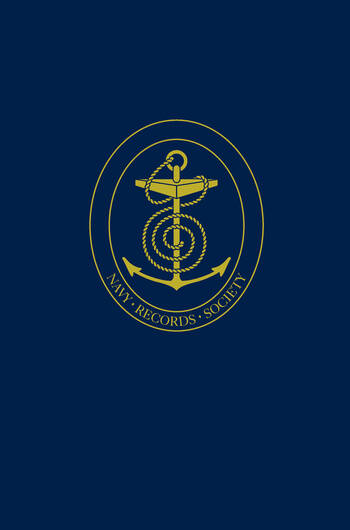 The Keith Papers: Vol. I

George Keith Elphinstone, Lord Keith (1746-1823) was a Scottish naval officer who entered the navy as a penurious midshipman towards the end of the Seven Years War. He had a long career at sea, during which he missed taking part in any major battle, but held major commands throughout the Revolutionary and Napoleonic Wars (except 1807-1812).  He is chiefly known for his skill in commanding very large fleets, often spread over a very wide area, and for the consequent prize money which made him the richest naval officer of his day. He also gained a reputation for being very keen on acquring it. These three volumes only represent a small fraction of the documents in Keith’s very large personal collection of letter and order books and loose documents in the National Maritime Museum, which occupies 124 foot of shelf space.  The first document in this volume is dated 1771, and the first half covers Keith’s career as a promising captain in the American Revolutionary War. He took part in the operations off Florida in 1778 and at the capture of Charleston in 1780 in which he distinguished himself by his navigational skill, and by good relations with the army, which was to mark the rest of his career.  The second part of the volume deals with Keith’s role in the occupation of Toulon in 1793, a small section of Lord Howe’s tactical memoranda in 1793-4, but the greater part is devoted to the operation which first bought Keith to the attention of the British public, the capture of the Cape of Good Hope from the Dutch in 1795-6.

William Perrin was born on 10 February 1874, and lost his father at a very early age. His education was thus limited, and he progressed through hard work and industry. He entered the Civil Service by examination and was posted to the Admiralty on 2 August 1893, serving first in the Record Office, where he acquired an aptitude for original research, and later in the legal branch, where he developed an interest in flag questions, upon which he became a recognised authority, and wrote the standard work. In December 1900 he became private secretary to Sir Evan MacGregor, Secretary to the Admiralty, and then to his successor, Sir Inigo Thomas. His services here were recognised by the First Sea Lord, Jackie Fisher, with a glowing tribute.  He was appointed Librarian at the Admiralty on 10 April 1908. The completion of the Admiralty arch over the Mall afforded accommodation for the reorganisation of the Library, and Perrin was the ideal man to undertake this. He gathered from attics and disused rooms throughout the Admiralty many volumes lying idle and uncared for, giving them a proper home, and took in hand the task of compiling an catalogue. Within two years he had succeeded to such an extent that his work was recognised in a special article in The Times on 16 September 1910, which referred to the transfer of some 5,000 volumes to their new, spacious and well-lit apartments. A year later a new reading room attached to the Library was opened by the First Lord, Reginald McKenna.  From 1922 until his death on 12 February 1931 Perrin was Honorary editor of The Mariner’s Mirror and honorary secretary of the Navy Records Society, and, by appointment of the Admiralty, secretary to the Trustees of the National Maritime Museum and the Macpherson Collection. His death was brought on by overwork, causing a breakdown in January, swiftly leading to his death.

The Keith Papers: Vol. I