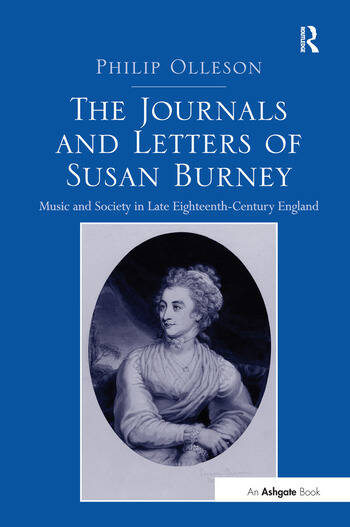 The Journals and Letters of Susan Burney: Music and Society in Late Eighteenth-Century England

Susan Burney (1755-1800) was the third daughter of the music historian Charles Burney and the younger sister of the novelist Frances (Fanny) Burney. She grew up in London, where she was able to observe at close quarters the musical life of the capital and to meet the many musicians, men of letters, and artists who visited the family home. After her marriage in 1782 to Molesworth Phillips, a Royal Marines officer who served with Captain Cook on his last voyage, she lived in Surrey and later in rural Ireland. Burney was a knowledgeable enthusiast for music, and particularly for opera, with discriminating tastes and the ability to capture vividly musical life and the personalities involved in it. Her extensive journals and letters, a selection from which is presented here, provide a striking portrait of social, domestic and cultural life in London, the Home Counties and in Ireland in the late eighteenth century. They are of the greatest importance and interest to music and theatre historians, and also contain much that will be of significance and interest for Burney scholars, social historians of England and Ireland, women's historians and historians of the family.

Philip Olleson is Emeritus Professor of Historical Musicology in the Department of Music at the University of Nottingham, UK. He has written extensively on the social history of music in England in the late eighteenth and early nineteenth centuries. Among his previous publications are The Letters of Samuel Wesley: Professional and Social Correspondence, 1797-1837 (2001), Samuel Wesley (1766-1837): A Source Book (2001) (with Michael Kassler), and Samuel Wesley: The Man and his Music (2003).

'Susan Burney's wonderfully vivid picture of social and musical life in London and the Home Counties during the 1780s comes in a hitherto unpublished series of letter-journals. The jewel in the crown for music historians is her amazing record of a year in the life of the Italian opera company at the King's Theatre. We are transported back into its world of gossip and adulation as leading castrati mingled with their aristocratic backers. Her extended set-piece descriptions are full of richly perceptive observations about music and the way it was performed.' Ian Woodfield, Queen's University Belfast, UK 'The edition, produced to a high standard by Ashgate, makes a substantial contribution to the scholarly literature on the Burneys. Besides the journal entries that form the main contents, among the many strengths of the volume are a variety of helpful and informative items supplementing the main text... The most substantial of these is Olleson’s biographical introduction... altogether so thoughtfully conceived and enjoyable to read, that it does ample justice to Susan Burney’s writings. It is surely destined to serve as an important reference source in its field'. Eighteenth-Century Music 'Recommended.' Choice '[A]n excellent production in every way and essential reading for anyone interested in music and society in the late eighteenth century England.' Early Music Review 'The long-awaited publication of this significant collection does not disappoint... The value of the source is beyond doubt. No other diarist has given so frank, detailed and spontaneous a record of a particularly interesting moment in time in the London music scene... Historians are greatly in debt to Olleson. The book does full justice to its fascinating subject matter, and it is a pleasure to read...' The Musical Times 'A volume of fine craftsmanship... As editor, Philip Olleson never fails to attend to the people, places, events, and music in Susan’s journals. Annotations provide astoni

The Journals and Letters of Susan Burney: Music and Society in Late Eighteenth-Century England