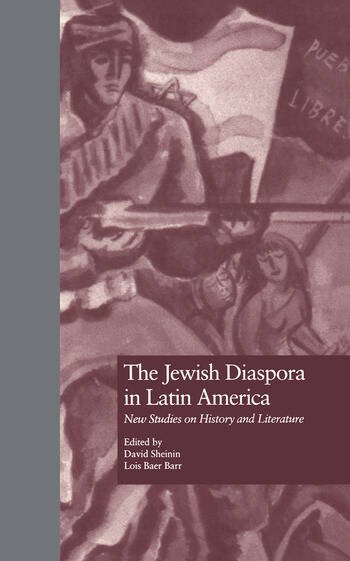 The Jewish Diaspora in Latin America: New Studies on History and Literature

First published in 1996. Routledge is an imprint of Taylor & Francis, an informa company.

PREFACE, ACKNOWLEDGMENTS, Postwar Latin American Jewry: An Agenda for the Study of the Last Five Decades, Theory in the Margin: Latin American Literature and the Jewish Subject, The Jonah Experience: The Jews of Brazil According to Scliar, Lenta biografia: Chejfec’s Post-Holocaust, Postcolonial Had Gadya, Discovering Self in History: Aida Bortnik and Gerardo Mario Goloboff, Esther Seligson and Angelina Mufiiz-Huberman: Jewish Mexican Memory and the Exile to the Darkest Tunnels of the Past, Oral Histories and the Literature of Reminiscence: Writing up the Jewish Argentine Past, Outsiders and Insiders: Brazilian Jews and the Discourse of Alterity, Los Colados, Colonial Origins of Contemporary Anti-Semitism in Latin America, Colonial Survival and Foreign Relations in Rio Grande do Sul, Brazil: The Jewish Colonization Association Colony of Quatro Irmaos, 1904-1925, Anti-Semitism and the Chilean Movimiento Nacional Socialista, 1932-1941, Anticardenismo and Anti-Semitism in Mexico, 1934- 1940, German Nazism and the Origins of Argentine Anti-Semitism, Equidistance and Gradualism in Argentine Foreign Policy Towards Israel and the Arab World, 1949-1955, Zionist Political Parties in Argentina from the Revolution of 1943 to the Establishment of the State of Israel, The Beirut Massacre and Jewish Identity in Brazil: A View from Porto Alegre, Jews under the Cuban Revolution: 1959-1995, NOTES ON CONTRIBUTORS, INDEX

David Sheinin is Assistant Professor of History at Trent University. In addition to his many articles on inter-American relations, Professor Sheinin has recently published The Organization of American States. Lois Baer Barr lectures in the Department of Hispanic Studies at Northwestern University. Her contributions to the field of Latin American Jewish literature include Isaac Unbound: Patriarchal Traditions in the Latin American Jewish Novel.

The Jewish Diaspora in Latin America: New Studies on History and Literature