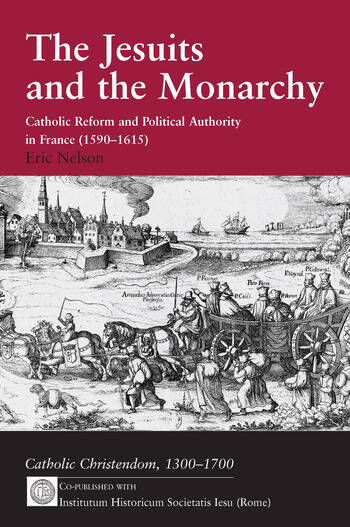 The Jesuits and the Monarchy: Catholic Reform and Political Authority in France (1590-1615)

The first three decades of Bourbon rule in France coincided with a period of violent fragmentation followed by rapid renewal within the French Catholic community. In the early 1590s, when Henri IV - Protestant head of the Bourbon house - acceded to the throne, French Catholics were at war with each other as Leaguer and Navarrist factions fought both militarily and ideologically for control of Catholic France. However, by 1620 a partially reconciled French church was in the process of defining a distinctive reform movement as French Catholics, encouraged by their monarchs, sought to assimilate aspects of the international Catholic reformation with Gallican traditions to renew their church. By 1650 this French Catholic church, and its distinctive reform movement forged in the decades following the collapse of the Catholic League, had become one of the most influential movements in European Catholicism. This study reconsiders the forces behind these dramatic developments within the French church through the re-examination of a classic question in French history: Why was the Society of Jesus able to integrate successfully into the French church in the opening decades of the seventeenth-century, despite being expelled from much of the kingdom in 1594 for its alleged role in the attempted assassination of the king? The expulsion, recall and subsequent integration of the Society into the French church offers a unique window into the evolution of French Catholicism between 1590 and 1620. It provides new insight into how Henri IV re-established royal authority in the French Catholic church following the collapse of the Catholic League and how this development helped to heal the rifts in French Catholicism wrought by the Leaguer movement. It also explores in unprecedented detail how Henri played an important role in channelling religious energy in his kingdom towards forms of Catholic piety -exemplified by his new allies the Jesuits - which became the foundation of

'Based on a wealth of archival sources in London, Paris and Rome, Nelson's book represents a scholarly and important contribution to our understanding of the religious and political machinations at a critical phase of French history. Despite its notable erudition, The Jesuits and the Monarchy remains accessible to the non-specialist and can be highly recommended.' Catholic Herald 'Eric Nelson's study makes a significant contribution to untangling the rhetorical wrangling and complicated alliance building that accompanied the shifting fortunes and position of the Society of Jesus in France after the Wars of Religion. In doing so, he sheds much needed light on the early construction of the Bourbon state... Nelson's book should thus be read carefully by scholars and students broadly interested in Old Regime politics, culture, and religion.' H-France Review ’...excellent book, concise, scholarly, and articulate...’ Theological Studies ’The strengths of this book are clear writing, mastery of the French political scene, balanced interpretation, several good illustrations, but above all meticulous research in contemporary pamphlets and in correspondence at archives in Paris, Rome, London, and Oxford.’ Church History ’Nelson writes clearly and exploits the archival sources in Paris and Rome skillfully. His mastery of the pamphlet literature especially impresses. The book represents a significant contribution to our understanding of the reign of Henry IV and of the policy of the Jesuits. This volume augurs well for the future cooperation of its copublishers, Ashgate and the Jesuit Historical Institute in Rome.’ The Historian ’... this carefully constructed and well-written study will be indispensable to anyone wishing to understand a key development in relations between monarchy and religion in early Bourbon France.’ The Catholic Historical Review ’... this book by Eric Nelson [...] appears as an important contribution to the study of the integr

The Jesuits and the Monarchy: Catholic Reform and Political Authority in France (1590-1615)