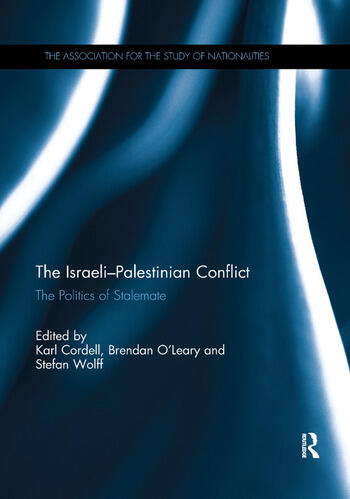 The Israeli-Palestinian Conflict: The politics of stalemate

The conflict between Israel and the Palestinians is one of the longest unresolved conflicts of modern times. It has brought about the early and violent deaths of tens of thousands of people, and blighted the lives of millions more. It is symbiotically linked to the wider crises that continue to engulf the wider region.

The purpose of this volume is to elucidate both the nature of the conflict, but perhaps more importantly to make some tentative proposals with regard to how the conflict may eventually be peacefully concluded. The contributors offer their prognosis in light of the fact that both Israeli and Palestinian society is becoming increasingly polarised and prey to fanatics who argue that the conflict will and should be solved by the complete destruction of one side by the other. In short, this volume seeks to provide rational counter-arguments to fundamentalist bile that questions the fundamental humanity of the opposing side.

This book was originally published as a special issue of the journal Ethnopolitics.

6. Escaping the Two-State Cul-de-Sac: The ‘Regional’, the International, and a New Environment for Israeli–Palestinian Negotiations Scott Lucas

7. Mirage or Vision: Binationalism in Theory and Practice Uriel Abulof

8. Israel–Palestine: One State or Two: Why a Two-State Solution is Desirable, Necessary, and Feasible Benjamin Miller

9. For the Long-Run: Avoiding the Temptations of the Status Quo, Rancour, and Self-Pity Brendan O’Leary

is Professor of Politics at Plymouth University, UK. He has numerous publications in the fields of German politics, German-Polish relations and the politics of nationalism and ethnicity. He is also co-editor of the journals Civil Wars and Ethnopolitics.

is Lauder Professor of Political Science at the University of Pennsylvania, USA. He is a former Senior Advisor on Power-sharing in the Standby Team of the United Nations Mediation Support Unit, a current International Fellow at the Senator George J Mitchell Institute at the Queen’s University Belfast, and a member of the US Council on Foreign Relations. Among his publications he has recently co-edited Power-Sharing in Deeply Divided Places and Divided Nations and European Integration.

is Professor of International Security at the University of Birmingham, UK. Frequently advising governments and international organizations, he specialises in the management of international security challenges, especially in relation to conflict settlement and post-conflict state-building. Among his publications are more than 20 books and special issues of journals, as well as over 80 journal articles and book chapters. He is co-editor of the journal Ethnopolitics.

The Israeli-Palestinian Conflict: The politics of stalemate