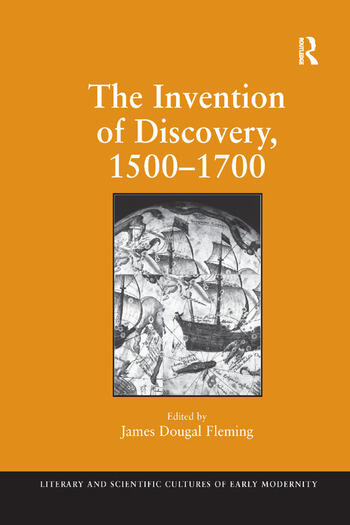 The early modern period used to be known as the Age of Discovery. More recently, it has been troped as an age of invention. But was the invention/discovery binary itself invented, or discovered? This volume investigates the possibility that it was invented, through a range of early modern knowledge practices, centered on the emergence of modern natural science. From Bacon to Galileo, from stagecraft to math, from martyrology to romance, contributors to this interdisciplinary collection examine the period's generation of discovery as an absolute and ostensibly neutral standard of knowledge-production. They further investigate the hermeneutic implications for the epistemological authority that tends, in modernity, still to be based on that standard. The Invention of Discovery, 1500-1700 is a set of attempts to think back behind discovery, considered as a decisive trope for modern knowledge.

James Dougal Fleming is Associate Professor of English at Simon Fraser University, Canada. He is also the author of Milton's Secrecy: And Philosophical Hermeneutics (Ashgate, 2008).

'This collection investigates how the modern concept of "discovery" was made, or invented, during the early modern period. Synthesizing the insights of postmodern philosophical hermeneutics with recent approaches to the history of science, this book raises important and timely questions. Broad in scope and interdisciplinary in approach, it will be of interest to scholars in literary studies, intellectual history, and the history of science.' Ralph Bauer, University of Maryland, USA 'Together, these essays provide a thorough and extensive investigation of the notion of the invention of discovery in the early modern period... Though, as he says, ’interdisciplinarity is a very general custom of postmodern academia’, [Fleming's] book underlines why it is important for that term to have meaning, and it will be of interest to scholars of intellectual and scientific history as well as those working in literary studies.' Review of English Studies '... well worth discovering...' Renaissance Quarterly 'The Invention of Discovery, 1500-1700, is particularly interesting from the perspective of historical epistemology, as it helps us to understand the meaning of early modern insistence on new�, newness�, and newly discovered�.' ISIS