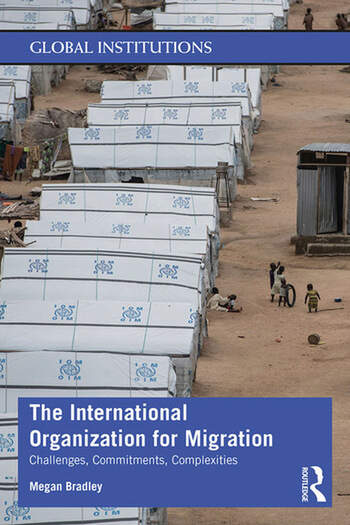 Since its establishment in 1951, the International Organization for Migration (IOM) has expanded from a small, regionally specific, logistically focused outfit into a major international organization involved in an almost dizzying array of activities related to human mobility. In 2016, IOM joined the UN system and has rebranded itself as the "UN migration agency." Despite its dramatic expansion and increasing influence, IOM remains understudied.

This book provides an accessible, incisive introduction to IOM, focusing on its humanitarian activities and responses to forced migration – work that now makes up the majority of the organization’s budget, staff, and field presence. IOM’s humanitarian work is often overlooked or dismissed as a veil for its involvement in other activities that serve states’ interests in restricting migration. In contrast, Bradley argues that understanding IOM’s involvement in humanitarian action and work with displaced persons is pivotal to comprehending its evolution and contemporary significance. Examining tensions and controversies surrounding the agency’s activities, including in the complex cases of Haiti and Libya, the book considers how IOM’s structure, culture, and internal and external power struggles have shaped its behaviour. It demonstrates how IOM has grown by acting as an entrepreneur, cultivating autonomy and influence well beyond its limited formal mandate.

The International Organization for Migration is essential reading for students and scholars of migration, humanitarianism, and international organizations.

Chapter 3: IOM in action: Contributions and controversies in Haiti and Libya

Megan Bradley is associate professor of political science and international development studies at McGill University, where her research focuses on refugees and forced migration, human rights, humanitarianism, transitional justice, and disasters. She is the author of Refugee Repatriation: Justice, Responsibility and Redress (2013), editor of Forced Migration, Reconciliation and Justice (2015) and co-editor of Refugees’ Roles in Resolving Displacement and Building Peace: Beyond Beneficiaries (2019). From 2012-2014, she was a Fellow in the Foreign Policy Program at the Brookings Institution in Washington, DC, where she worked with the Brookings Project on Internal Displacement. She has also worked with the Office of the United Nations High Commissioner for Refugees (UNHCR), and the International Development Research Centre (IDRC), and served as the Cadieux-Léger Fellow at Global Affairs Canada.