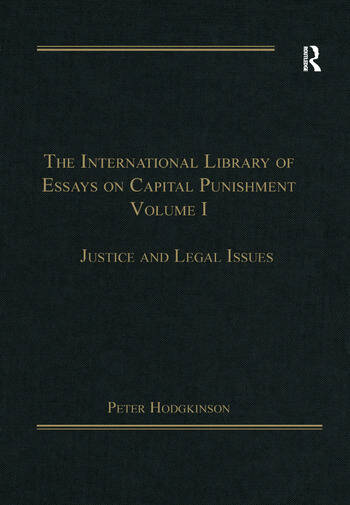 The International Library of Essays on Capital Punishment, Volume 1: Justice and Legal Issues

This volume provides up-to-date and nuanced analysis across a wide spectrum of capital punishment issues. The essays move beyond the conventional legal approach and propose fresh perspectives, including a unique critique of the abolition sector. Written by a range of leading experts with diverse geographical, methodological and conceptual approaches, the essays in this volume challenge received wisdom and embrace a holistic understanding of capital punishment based on practical experience and empirical data. This collection is indispensable reading for anyone seeking a comprehensive and detailed understanding of the complexity of the death penalty discourse.

Peter Hodgkinson OBE is Director of the Centre for Capital Punishment Studies and Senior Research Fellow at the University of Westminster, UK.

The International Library of Essays on Capital Punishment, Volume 1: Justice and Legal Issues