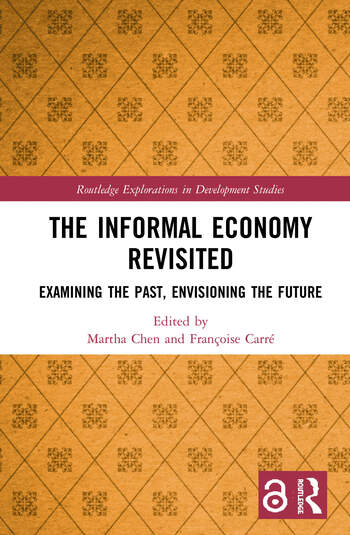 The Informal Economy Revisited: Examining the Past, Envisioning the Future

This landmark volume brings together leading scholars in the field to investigate recent conceptual shifts, research findings and policy debates on the informal economy as well as future challenges and directions for research and policy. Well over half of the global workforce and the vast majority of the workforce in developing countries work in the informal economy, and in countries around the world new forms of informal employment are emerging.   Yet the informal workforce is not well understood, remains undervalued and is widely stigmatized.

Contributors to the volume bridge a range of disciplinary perspectives including anthropology, development economics, law, political science, social policy, sociology, statistics, urban planning and design. The Informal Economy Revisited also focuses on specific groups of informal workers, including homeworkers, street vendors and waste pickers, to provide a grounded insight into disciplinary debates. Ultimately, the book calls for a paradigm shift in how the informal economy is perceived to reflect the realities of informal work in the global South, as well as the informal practices of the State and Capital, not just Labour.

is the culmination of twenty years of pioneering work by WIEGO (Women in Informal Employment: Globalizing and Organizing), a global network of researchers, development practitioners and organizations of informal workers in 90 countries. Researchers, practitioners, policy makers and advocates will all find this book an invaluable guide to the significance and complexities of the informal economy, and its role in today’s globalized economy.

1. Informality: The Bane of the Labouring Poor under Globalized Capitalism – Jan Breman

5. The Measurement of Informal Employment in Mexico – Rodrigo Negrete

PART 3 – ECONOMICS AND THE INFORMAL ECONOMY

8. Informality and the Dynamics of the Structure of Employment – James Heintz

19. Extending Labour Standards to Informal Workers at the Base of Global Garment Value Chains: New Institutions in the Labour Market – Meenu Tewari

23. Waste Pickers and Their Right to the City: Dispossession and Displacement in 19th Century Paris and Contemporary Montevideo – Lucía Fernandez

26. The Place of Informal Workers in Different Approaches to Social Protection – Francie Lund

29. Informal Workers in a Context of Urbanisation and Migration: Reflections from China for Social Policy in Asia – Sarah Cook

PART 10 – INFORMAL WORKERS AND THE STATE

32. Informal Workers and the State in India – Rina Agarwala

34. Waste and Citizenship Forum: Waste Pickers and the State in Brazil – Sonia Dias

The Informal Economy Revisited: Examining the Past, Envisioning the Future