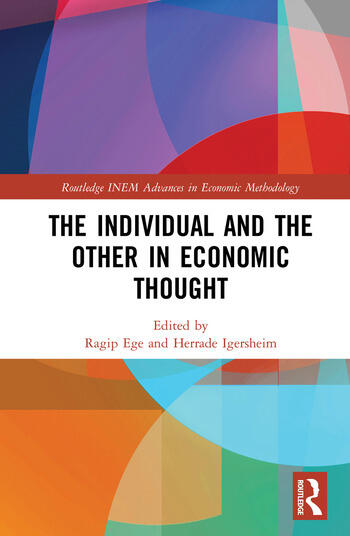 The Philosophy of Economics primarily considers the economic agent as a moral subject. Economics, however, has long overlooked the agent’s moral – that is to say, reasonable – dimension, to focus instead on the strictly rational. This volume seeks to address this neglected topic through exploring the Individual and the Other.

The economic agent refers to "himself" (herself) in terms of his desire and passions, yet also refers to others besides himself. For the rational economic agent, what is the nature of this relationship with the Other? Should it not be understood as undergoing a transformation once we come to consider the economic agent as a reasonable being? Through what process does the Other pass from being an instrument at the disposal of a rational agent to being an end in itself for a moral subject? In other words, how does another become "an Other"? These questions are behind the re-examination of certain fundamental notions which takes place in this book, an examination which involves a re-reading of certain great authors. With contributions from authors around the world, this work is divided into three main parts. The first deals with individuals from the history of economic thought such as Adam Smith, Karl Marx and Hannah Arendt; this is then followed by a thematic section in which the concepts of recognition and subjectivity are questioned in a market context. Finally, the third part offers an analysis of the issue of "the Individual and the Other" in different fields of the recent economic analysis including game theory, decision theory or social choice.

aims to help the reader better understand how the relationship between the Individual and the Other has been conceived, conceptualized and framed in economic analysis. It will be of great use to graduate students, scholars and any reader interested in this crucial issue.

List of Contributors.  The Individual and the Other in Economic Thought: an Introduction, Ragip Ege and Herrade Igersheim.  Part I Textual Part. The Individual and the Other in the History of Thought.  1. From Vanity to the Love of Systems, from Luxury to the Accumulation of Capital, from the Gaze of Others to the Endless Process, Daniel Diatkine and Benoît Walraevens.  2. Charles Fourier: a ‘non-scientistic’ Conception of Justice, Ragip Ege and Sylvie Rivot.  3. Mill’s Qualitative Hedonism as an Ethics of Desire: Towards an Intersubjective Concept of Pleasure, Nizar Hariri.  4. The Worker at the Heart of the Analysis: the Saint-Simonian Approach to Political Economy, Gilles Jacoud.  5. Economics and Humanity: Theory of Development in A. Sen and the Concept of Human Integral Development, Tony E. Persico, Nicola Mattoscio and Edgardo Bucciarelli.  6. The Disappearance of a Moral Attitude. An Analysis comparing H. Arendt and F. von Hayek, Marlyse Pouchol.  7. Karl Marx and Charles Fourier: Criticism of Contemporary Society and New Philosophical Anthropology, Riccardo Soliani.  Part II Thematic Part. The Individual and the Other as Recognition and Subjectivity.  8. Self-development and Social Justice, Catherine Audard.  9. Aristotle on Reciprocity and Social Health, Robert Gallagher.  10. The Self and the Others. Recognition and Subjective Well-Being: some Empirical Evidences, Francis Munier.  11. On Levinas’s Political ‘Theory’: A Two-Dimensional Conception of Justice from the Perspective of Equality, Cyrielle Poiraud.  12. The ‘Recognition’ of the Other as a Pre-requisite for Fair Market Prices, Stefano Solari.  13. The Agent as an End in Itself in the Economic Domain from a Biological and Smithian Perspective, Eleonora Viganò.  Part III Analytical Part. The Individual and the Other in Modern Economic Analysis.  14. Perfect Prediction Equilibrium, Ghislain Fourny, Stéphane Reiche and Jean-Pierre Dupuy.  15. Consumption Externality and Pigovian Taxation. A Comparison between Rawls and Bentham, Herrade Igersheim and Thi Kim Cuong Pham.  16. David Hume and Rationality in Decision-Making: A Case Study on the Economic Reading of a Philosopher, André Lapidus.  17. The Ontology of Schelling’s ‘Theory of Interdependent Decisions’, Lauren Larrouy.  18. Instrumental Rationality, Prudence and Communicative Action: Deliberation in, and Communication through, Individual Rational Decision-making, Jean Mercier Ythier.  19. Conflicts between Liberty and Social Welfare in Historical Perspective, Iona Tarrant and Jonathan Perraton.  20. Oneself, the Other and Both in Bargaining Models, Fabrice Tricou.  Index

Ragip Ege is Emeritus Professor in Economics at the University of Strasbourg, France, and a member of the Bureau d’Economie Théorique et Appliquée (BETA). His recent research activities focus on the problems of ethics and justice and he is particularly interested in Hegelian political and economic thought.

Herrade Igersheim is a CNRS Research Associate Professor at the University of Strasbourg, France, and Deputy Director of the Bureau d’Economie Théorique et Appliquée (BETA). Her research focuses on economics and philosophy, welfare economics and experimental economics devoted to voting methods.