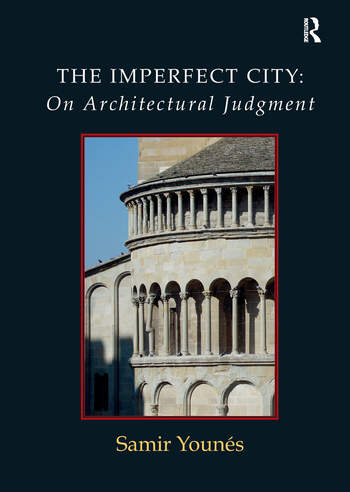 The Imperfect City: On Architectural Judgment

Samir Younés is a Professor of architecture at the University of Notre Dame where he was Director of Rome Studies in Architecture. He is also the author of The True, the Fictive, and the Real. The Historical Dictionary of Architecture of Quatremère de Quincy.

’The Imperfect City is at once an incisive dissection of the behaviour of the architect, an exhaustive analysis of the ideas that underlie architectural thinking and a fiercely logical theory of architecture. While it comes from a broadly traditional outlook, the debate is comprehensive and anyone concerned with architectural thought should read this book. From now on, no discussion of architectural philosophy will be complete without reference to Samir Younés.’ Robert Adam, Adam Architecture, UK ’This is a significant book for anyone interested in clear thinking about architecture, about how it is evaluated, and how architectural culture is tied to several discourses. Samir Younés’s learned and direct prose shows where the discourse needs to be deepened and where it has not yet ventured. He elaborates a discourse on crucial matters that architects feel but for various reasons do not express. Architects, historians, and especially students of architecture will benefit from full reflection on the matters discussed in this book.’ Léon Krier ’This is a most perceptive and engaging examination of the ways in which we have understood and practiced architectural judgement in modern times. The author suggests that modern architectural judgement has primarily been based on "historical, cultural, political, psychological and expressive" criteria. Samir Younés discusses arguments from all competing sides and invites the reader to join in on the debate. The Imperfect City: on Architectural Judgement should be read by the general public, professionals and students alike.’ Demetri Porphyrios, Porphyrios Associates, UK 'The author's proposition is bold and brilliant: if architecture is capable of expressing certain external contents, it does so through its 'character'.' Arquitectura Viva

The Imperfect City: On Architectural Judgment