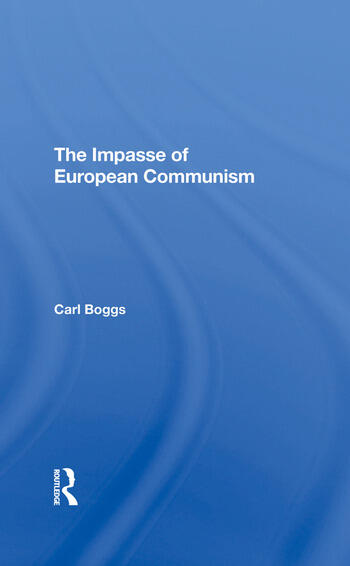 The Impasse Of European Communism

The major Communist parties in Western Europe claim a commitment to a "democratic road to socialism." Often this is a genuine evolution of traditional Marxist/Leninist ideology based on the assumption that political and economic power can be obtained through gradual change rather than revolution and through the utilization of democratic processes. How well is this strategy working? Not very well, concludes the author of this book. Carl Boggs bases his analysis on a theoretical assessment of the historical and strategic development of Eurocommunism — of those par ties and movements (notably in France, Italy, and Spain) that seek a transition to socialism based on the democratization of existing political and economic structures (the so-called parliamentary road to socialism). After examining the logic and premises of this conception, he moves to a critique of the major Eurocommunist theoreticians—e. g., Togliatti, Berlinguer, Ingrao, Napolitano, Carrillo, Marchais, Elleinstein, Poulantzas, and Claudin. He concludes that their ideas fail to resolve the historic Marxist conflict between democratization and rationalization (understood here in terms of the drive toward statism, bureaucratization, and further refinement of the social division of labor under capitalism). In fact, says Dr. Boggs, Eurocommunism will probably represent a sort of historical resolution of legitimation and production crises within Mediterranean capitalism that extends rather than overturns hierarchical social and authority relations, the capitalist state, and the social division of labor. Such a resolution might broadly parallel the function of social democracy in Northern Europe in a previous phase of capitalist development.

Also of Interest -- Preface -- Introduction: Marxism, Democracy, and Eurocommunism -- Beyond Vanguardism: The “Third Road” Strategy -- The PCI: A Party of Modernization? -- The Limits of Structural Reformism -- A Return to Social Democracy? -- Epilogue Gramsci and Eurocommunism

The Impasse Of European Communism