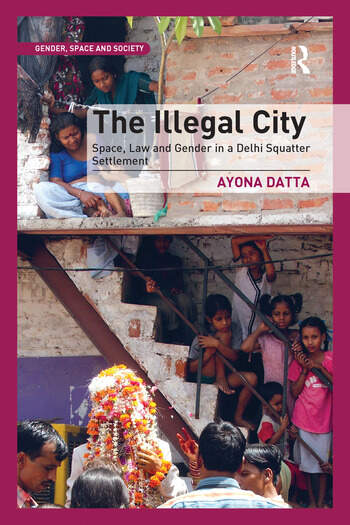 The Illegal City: Space, Law and Gender in a Delhi Squatter Settlement

The Illegal City explores the relationship between space, law and gendered subjectivity through a close look at an 'illegal' squatter settlement in Delhi. Since 2000, a series of judicial rulings in India have criminalised squatters as 'illegal' citizens, 'encroachers' and 'pickpockets' of urban land, and have led to a spate of slum demolitions across the country. This book argues that in this context, it has become vital to distinguish between illegality and informality since it is those 'illegal' slums which are at the receiving end of a 'force of law', where law is violently encountered within everyday spaces. This book uses a gendered intersectional lens to explore how a 'violence of law' shapes how 'public' subjectivities of gender, class, religion and caste are encountered and negotiated within the 'private' spaces of home, family and neighbourhood. This book suggests that resettlement is not a condition that squatters desire; rather something that is seen as the only way out of the 'illegal' city. The wait for resettlement is a temporal space of anxiety and uncertainty, where particular kinds of politics around law, space and gender takes shape, which transform squatters' relations with the state, urban development, civil society, and with each other. Through their everyday struggles around water, sanitation, social and political organisation and the transformation of their homes and families, this book shows that the desire for the 'legal city' is also the irony and utopia of home, which will remain an incomplete gendered project - both for the state and for squatters.

Ayona Datta is a Senior Lecturer in Citizenship and Belonging at the School of Geography, University of Leeds, UK.

'This fresh, multilayered, meticulous examination of everyday life in a squatter camp in New Delhi reveals key intersections among land tenure, illegality, and gender power relations to show how vulnerable residents experience law in deeply transformative fashion, and everyday life becomes the fulcrum where residents negotiate their relationships with each other and with the state. The use of an analytical lens centered on gender, but including caste, class, and religion, allows Datta to draw a subtle and rich portrait of how vulnerable residents encounter the state in fragile housing situations. This compelling analysis sheds new light on interstices of vulnerability that are often hidden from view or simply neglected and attributed to the "normality" of life among the poor. The Illegal City is immensely smart and will appeal to a wide readership.' Cecilia Menjivar, Arizona State University, USA ’The Illegal City is a thought provoking study of the double nature of law as both threat and hope in the lives of people in squatter settlements in a city. Paying close attention to the processes of governmentality through which space is categorized and acted upon, Datta produces an excellent ethnographic account of the fine workings of power and domination that are reproduced within the slum. Especially interesting is the way she tracks the manner in which gender folds into other differences and produces the uneven subjectivities through which law is encountered. This book is theoretically bold and ethnographically well anchored in the lived experiences of the poor.’ Veena Das, Johns Hopkins University, USA ’An insightful and thought-provoking account of what illegality means for Delhi’s squatters which takes a strikingly original approach to gender, showing how gender and illegality are mutually constituted, and exploring the consequences in both private and public spaces.’ Ann Varley, University College London, UK 'At its core, it is an immensely scholarly

The Illegal City: Space, Law and Gender in a Delhi Squatter Settlement