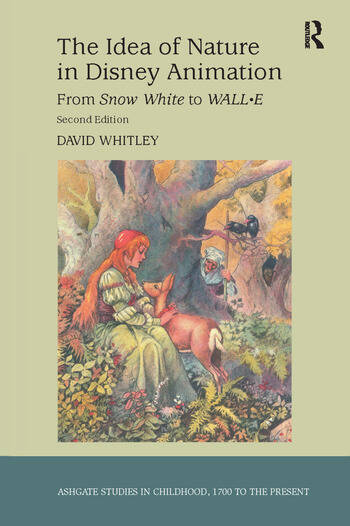 The Idea of Nature in Disney Animation: From Snow White to WALL-E

In the second edition of The Idea of Nature in Disney Animation, David Whitley updates his 2008 book to reflect recent developments in Disney and Disney-Pixar animation such as the apocalyptic tale of earth's failed ecosystem, WALL-E. As Whitley has shown, and Disney's newest films continue to demonstrate, the messages animated films convey about the natural world are of crucial importance to their child viewers. Beginning with Snow White, Whitley examines a wide range of Disney's feature animations, in which images of wild nature are central to the narrative. He challenges the notion that the sentimentality of the Disney aesthetic, an oft-criticized aspect of such films as Bambi, The Jungle Book, Pocahontas, Beauty and the Beast, and Finding Nemo, necessarily prevents audiences from developing a critical awareness of contested environmental issues. On the contrary, even as the films communicate the central ideologies of the times in which they were produced, they also express the ambiguities and tensions that underlie these dominant values. In distinguishing among the effects produced by each film and revealing the diverse ways in which images of nature are mediated, Whitley urges us towards a more complex interpretation of the classic Disney canon and makes an important contribution to our understanding of the role popular art plays in shaping the emotions and ideas that are central to contemporary experience.

David Whitley is Lecturer in English in the Faculty of Education, University of Cambridge, UK.

'In this welcome new and expanded edition of his 2008 book, David Whitley makes a major contribution not only to Disney studies but to film/media studies and to studies of environmental representation. Packed with persuasive close readings, well-researched, and engagingly written, his book offers fresh perspectives on the Disney canon and its place in popular and academic culture.' Kenneth Kidd, University of Florida 'Whitley carefully and expertly preserves both the inherent wildness and the human sentiment in his attempt to demonstrate how Disney’s animated features function to educate mostly young audiences on salient environmental issues... In looking at wilderness, [Whitley] locates the idea of conservation of the idyllic realm of nature, endangered by the human, in Bambi, and demonstrates how films like Pocahontas contest value systems of power and beauty... Summing Up: Recommended. Upper-division undergraduates through faculty.' Choice

The Idea of Nature in Disney Animation: From Snow White to WALL-E