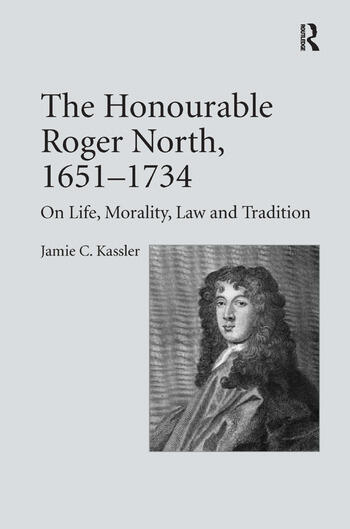 Roger North is known today as a biographer and writer on music, architecture and estate management. Yet his writings, including thousands of pages still in manuscript, also contain critical reflections about intellectual and social changes taking place in England. This feature is little recognised, because North's reputation as an author was formed between 1740 and 1890, when seven of his manuscripts were published in editions that drastically altered his original texts, and when the reception of these works was influenced by 'Whig' criticism. Although some of North's writings were later edited according to more rigorous standards, many critics still utilise the discredited editions and continue to repeat 'Whig' stereotypes of North. Eschewing such stereotypes, Jamie C. Kassler provides the first interpretation of North's philosophy by retrieving what is consistent in his pattern of thought and by analysing some of his practices and purposes as a writer. By these methods, she shows that North, a common lawyer by profession, combined the moral scepticism of Montaigne with the legal philosophy of Coke, Selden and Hale. The result was a sceptical philosophy that accounts for North's critical reflections on the dogmatism of natural-law doctrine, both in its medieval intellectualist version and in its voluntarist reformulation that began with Grotius and was developed by Hobbes, Pufendorf and Locke. Kassler bases her interpretation on a wide range of North's writings, even those in which one might least expect to find a philosophy. In addition, one of his manuscripts, which is edited here for the first time, includes an exposition of his jurisprudence, as well as his attempt to bring England's past into the legal tradition. These features form part of North's broader argument that language, including the language of law, is the invention of humans and a representation of their changing history and habits, an argument that he later extended to musical 'language' in his more finished essay, 'The Musicall Grammarian' (1728).

Contents: Introduction; Part I An Interpretation of Roger North (1651-1734): Outlines of a life; How to live independently; Custom the arbiter of human life; Summary and Conclusion. Part II An Edition of Roger North's 'Of Etimology' (c1706-c1715): Introduction to the edition; British Library Additional Manuscript 32530: ff5-111v; Glossary; Appendices; References; Indices.

Jamie C. Kassler was elected as a fellow (1991) of the Australian Academy of the Humanities for contributions to musicological theory and was a recipient of the Centenary Medal (2003) for service to Australian society and the humanities in the study of philosophy. A collection of her articles was published as Music, Science, Philosophy: Models in the Universe of Thought (Ashgate 2001). She is also the author of The Beginnings of the Modern Philosophy of Music (Ashgate, 2004).

'Jamie Kassler is the leading authority on Roger North, and over the years she has been responsible for careful and illuminating editions of North’s writings. Her new edition of Of Etimology continues this invaluable editing work. It also provides a monograph-length essay on North’s conception of the persona of the natural philosopher and humanist, integrated into a thoughtful treatment of his life. This essay provides what is now the best starting point for readers coming to North for the first time.' Stephen Gaukroger, University of Sydney, Australia

'This book has much to offer: Kassler exploits North's surviving papers (numbering over fifty thousand leaves) with assiduity to establish greater coherence to North's sprawling intellectual accomplishment… Its comprehensive bibliography and original analysis make it the starting point for future studies of Roger North.' Journal of British Studies

'This is a scholarly and thoughtful work which presents a coherent interpretation of North.' Parergon

'… a most useful contribution to the fund of resources on the tumultuous seventeenth century, as well as providing a new valuation of the very remarkable Roger North and his many pursuits.' Seventeenth Century News

'The Honourable Roger North is a model of how to present scholarly research, with clear, large print, illustrations, and proper, bottom-of-the-page footnotes. References are carefully explained, and there is a large glossary of the common law and other terms North uses that are unfamiliar to modern readers… The book also has an excellent index covering both main parts and the appendices. It will be principally of interest to intellectual historians and historians of English jurisprudence.' Sixteenth Century Journal

'It is only in the last forty years that North’s original manuscripts have been systematically analysed, and Kassler’s research in piecing together, identifying and dating North’s manuscripts and notes will be invaluable to future scholars of his work… The fresh approach to the subject matter and the presentation of new material incorporated into a carefully edited and well-researched volume will be highly anticipated by those studying North and of great interest to historians and philosophers of language, law and politics of this and other periods.' Journal of Eighteenth-Century Studies