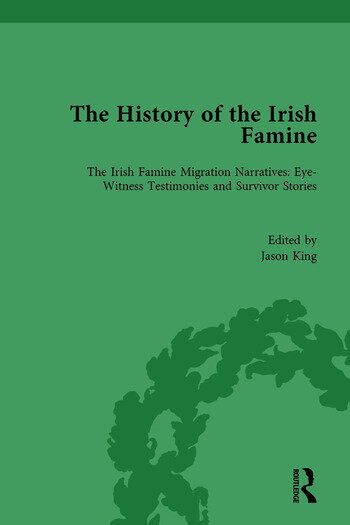 The Great Irish Famine remains one of the most lethal famines in modern world history and a watershed moment in the development of modern Ireland – socially, politically, demographically and culturally. In the space of only four years, Ireland lost twenty-five per cent of its population as a consequence of starvation, disease and large-scale emigration. Certain aspects of the Famine remain contested and controversial, for example the issue of the British government’s culpability, proselytism, and the reception of emigrants. However, recent historiographical focus on this famine has overshadowed the impact of other periods of subsistence crisis, both before 1845 and after 1852.

This volume breaks new ground in bringing together foundational narratives of one of Europe and North America’s first refugee crises — making visible their impact in shaping perceptions, public opinion, and patterns of memorialization of Irish forced migration. It documents eyewitness impressions of suffering Irish emigrants, and raises questions about what literary conventions, mnemonic motifs, and popular images can be found in eyewitness accounts, press coverage, and foundational narratives of Famine Irish forced migration. These primary sources provide a model for understanding how representations of forced migration shape public opinion and policy.

Dr Gerard Moran, European School Brussels. Dr Moran is author of many books and articles on Emigratin from Ireland.