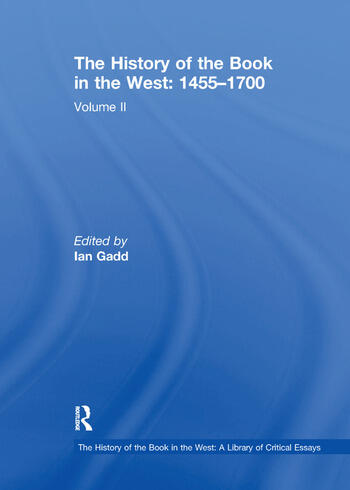 Beginning with one of the crucial technological breakthroughs of Western history - the development of moveable type by Johann Gutenberg - The History of the Book in the West 1455-1700 covers the period that saw the growth and consolidation of the printed book as a significant feature of Western European culture and society. The volume collects together seventeen key articles, written by leading scholars during the past five decades, that together survey a wide range of topics, such as typography, economics, regulation, bookselling, and reading practices. Books, whether printed or in manuscript, played a major role in the religious, political, and intellectual upheavals of the period, and understanding how books were made, distributed, and encountered provides valuable new insights into the history of Western Europe in the fifteenth, sixteenth, and seventeenth centuries.

Ian Gadd is a Lecturer in the School of English and Creative Studies, Bath Spa University, UK

’the volume serves as testament to Gadd’s ability to select judiciously...the volume is comprehensive in the way it traces the backbone of book history scholarship. It is unlikely to be superseded for quite some time.’ Renaissance Studies '...a representative sample of the many different approaches to book history scholars have undertaken over the past several decades...The editor is to be praised for executing well a very difficult job.' College & Research Libraries 'This volume is in every respect...a solid and useful collection and addition to the growing literature on book history'. Notes and Queries 'Gadd has done fine scholarly service in this compilation, and his introduction is itself a wonderful entry point to the type of study of book history that is becoming more and more in vogue.' Journal of the Early Book Society