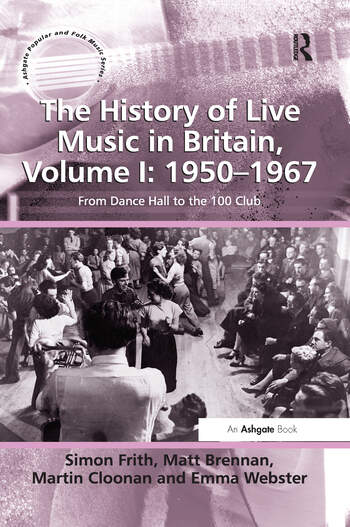 The social history of music in Britain since 1950 has long been the subject of nostalgic articles in newspapers and magazines, nostalgic programmes on radio and television and collective memories on music websites, but to date there has been no proper scholarly study. The three volumes of The History of Live Music in Britain address this gap, and do so from the unique perspective of the music promoter: the key theme is the changing nature of the live music industry. The books are focused upon popular music but cover all musical genres and the authors offer new insights into a variety of issues, including changes in musical fashions and tastes; the impact of developing technologies; the balance of power between live and recorded music businesses; the role of the state as regulator and promoter; the effects of demographic and other social changes on music culture; and the continuing importance of do-it-yourself enthusiasts. Drawing on archival research, a wide range of academic and non-academic secondary sources, participant observation and industry interviews, the books are likely to become landmark works within Popular Music Studies and broader cultural history.

Simon Frith is Tovey Professor of Music at the University of Edinburgh. His work is collected in Taking Popular Music Seriously (Ashgate 2007) and, with Simon Zagorski-Thomas, he edited The Art of Record Production (Ashgate 2012). He chairs the judges of the Mercury Music Prize and is a fellow of the British Academy. Matt Brennan is the Chancellor’s Fellow of Music at the University of Edinburgh. He specialises in popular music studies combining historical, sociological, and business perspectives. His work has previously appeared in the journals Popular Music, Popular Music History, and Jazz Research Journal. Martin Cloonan is Professor of Popular Music Politics at the University of Glasgow. His research interests cover all areas of music and politics including censorship, regulation and music policy. Previous books include Popular Music and The State in the UK (Ashgate, 2007) and Dark Side of The Tune: Popular Music and Violence (Ashgate, 2008). Emma Webster received her PhD from the University of Glasgow in November 2011; her thesis was concerned with live music promotion. Before returning to academia, she worked for a number of years in music and theatre in a variety of roles and genres including opera, ’world’ music, and acid techno.

'...This engagingly written, carefully documented study should interest scholars and students of popular music history and cultural history and might well provide fruitful avenues for further research...Highly recommended.' Choice '... absolutely fascinating... It is a magnificent read for anyone with a broad interest in the live music scene in Britain. Roll on the next volume and the one after.' Folk North West ’... this 'social history of music in Britain' written by a team of popular music scholars has a lot to offer to any 'certified' historian with an interest in post-war popular culture and music in particular’. Sehepunkte ’The four authors should be congratulated for achieving a near seamless synergy in terms of style and argument throughout this volume, especially given its breadth. Clear introductions and conclusions help to draw the multiple threads of each chapter together and the text is eminently readable. ... This book sets a very high standard for future work and I await further instalments with interest’. Popular Music