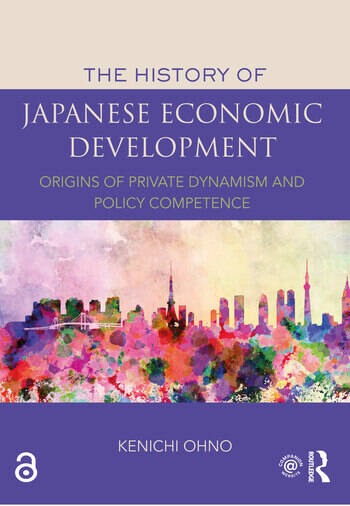 The History of Japanese Economic Development: Origins of Private Dynamism and Policy Competence

This is an easy-to-read book that explains how and why Japan industrialized rapidly. It traces historical development from the feudal Edo period to high income and technology in the current period. Catch-up industrialization is analyzed from a broad perspective including social, economic and political aspects. Historical data, research and contesting arguments are amply supplied. Japan’s unique experience is contrasted with the practices of today’s developing countries. Negative aspects such as social ills, policy failures, military movements and war years are also covered.

Nineteenth-century Japan already had a happy combination of strong entrepreneurship and relatively wise government, which was the result of Japan’s long evolutionary history. Measured contacts with high civilizations of China, India and the West allowed cumulative growth without being destroyed by them. Imported ideas and technology were absorbed with adjustments to fit the local context.

The book grew out of a graduate course for government officials from developing countries. It offers a comprehensive look and new insights at Japan’s industrial path that are often missing in standard historical chronicles. Written in an accessible and lively form, the book engages scholars as well as novices with no prior knowledge of Japan.

3 Transition from Edo to Meiji

6 Budget, Finance and the Macroeconomy of Meiji

13 The Asset Bubble and Prolonged Recession

Kenichi Ohno is Professor at the National Graduate Institute for Policy Studies, Tokyo. He was born in Kobe, Japan and holds a PhD in Economics from Stanford University, California. He worked at the International Monetary Fund and taught at the University of Tsukuba and Saitama University before assuming his current position.

'This is a very exceptional book. Kenichi Ohno gives a brand-new analysis on Japan’s economic development and history from Edo until now, filling the gaps left by the cultural perspective of Japan’s history. It is admirable that Kenichi Ohno keeps his soberness and unbiasedness throughout his analysis by embracing various kinds of other explanations.' — Wu Suping, Editor, China CITIC Press

'Ohno’s main contribution has been in the analysis on how the late comers of industrialization can catch up with advanced countries under the pressure of globalization. His unique approach to that issue is to analyze the interaction between domestic institutions and external impacts. Ohno considers the globalization faced by contemporary developing countries similar to the Western impacts faced by Japan in the 19th century. Japan’s flexible and pragmatic institutions, social capabilities and positive response to the foreign pressure have led to the success of the economic development. I am sure that reading the work by Kenichi Ohno, we are convinced that the experience of Japan is relevant to contemporary developing countries.

Kenichi Ohno has written extensively in Japanese about this topic. I am glad that he has now incorporated his findings into a book in English, which is useful for readers who are not familiar with Japanese language.'

'This book offers an accessible and holistic description and analysis of Japan's economic development from the seventeenth century to the present. The author brings the fresh perspective of an expert on contemporary developing economies to central historical questions in Japan's modern evolution such as the interplay of domestic and foreign elements and of private dynamism and public policy. He draws on the work of historians, anthropologists, and sociologists alike to provide a multifaceted explanation of Japan's experience of adapting external influences to indigenous patterns while paying careful attention to key scholarly debates. Recommended for both general readers and students of Japanese and comparative development.'

'The experience of living and teaching in some developing countries and working with foreign policymakers for many years have helped the author, Professor Ohno, to become well- acquainted with all economic barriers and challenges that the latecomers might face in their economic development process. This has motivated him to analyze deeply the history of Japan’s economic development facing those challenges. Using historical examples, the author has successfully depicted the evolutionary and accumulative nature of Japan’s internal capabilities, and the Japanese private sector’s dynamism and resilience before external forces. While the author’s analyses have been based on the theoretical institutional economic framework to highlight Japan’s most significant historical events, the readers are not required to be familiar with complicated mathematical economic theories to understand comprehensively the path traveled by Japan as a developing country.

The present book is strongly recommended to both researchers and students with different academic backgrounds who are interested in understanding the factors influencing the economic development of latecomer countries.' — Dr Nahid Pourrostami, Assistant Professor, Faculty of World Studies, University of Tehran, Iran

The History of Japanese Economic Development: Origins of Private Dynamism and Policy Competence