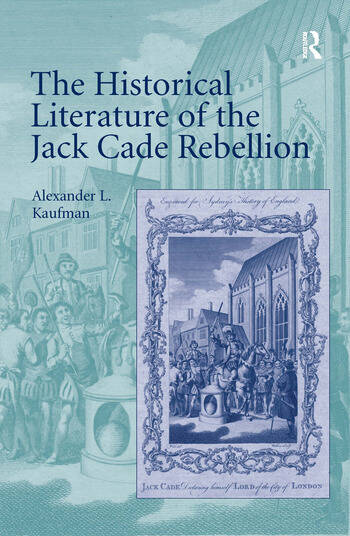 The Historical Literature of the Jack Cade Rebellion

Accounts of Jack Cade's 1450 Rebellion-an uprising of some 30,000 middle-class citizens, protesting Henry VI's policies, and resulting in hundreds of deaths as well as the leaders' execution-form the dominant entry in a group of quasi-historical documents referred to as the London chronicles of the Fifteenth Century. However, each chronicle is inherently different and highly subjective. In the first study of the primary documents related to the Cade Rebellion, Alexander L. Kaufman shows that the chroniclers produced multiple representations of the event rather than a single, unified narrative. Aided by contemporary theories of historiography and historical representation, Kaufman scrutinizes the differing representations and distinguishes the writers' objectiveness, their underrated literary skills, and their ideological positions on the rebellion and fifteenth-century politics. He demonstrates how the use of figurative language is related to writing about trauma, and how descriptions of Cade's procession through London are a violent parody of midsummer festivals. In an exploration of authenticity in the descriptions of Cade, Kaufman also examines the characterization and plot devices that push Cade towards the realm of myth, showing that representations of Cade are influenced by popular fifteenth-century stories of Robin Hood.

Alexander L. Kaufman is an Assistant Professor of English at Auburn University at Montgomery, USA

'... an original contribution to discussion of fifteenth-century chronicles and to Cade's Rebellion.' Literature & History 'A further strength of the book is Kaufman's sense of the wider context of the Wars of the Roses and the way the Cade Rebellion should be interpreted as part of this context. Kaufman shows a firm grasp of the sources for this broader context and makes a good case for reading the Cade Rebellion within this context.' Parergon 'There is a good deal of interest to folklorists in this book. Kaufman looks at the relationship between the behaviour of the rebels, especially Cade, in relation to customs like Midsummer Watch, the revelry of the carnivalesque, the symbolism of dress, deployment of language and some aspects of balladry. ... The Historical Literature of the Jack Cade Rebellion is a valuable contribution to a number of cognate fields, including literature, cultural studies, history, and folklore.' Folklore 'Through a study of mostly London chronicles of the fifteenth century, Kaufman draws conclusions on the diversity of the chroniclers' ideologies, their literary devices, the representations and use of carnival, processions, attire, and symbols in the revolt itself, the ambiguous and mercurial character of Cade, and the interlacing of myth and history. ... Throughout, Kaufman studies the porous walls between fact and fiction. To do so, he feasts on a vast smorgasbord of film, literary, historical, sociological, anthropological, linguistic, and psychoanalytic theory, assembling to his cause a wide range of theoreticians, historians, poets, and filmmakers...' Speculum '... The Historical Literature of the Jack Cade Rebellion sheds new light on the litÂ­erary qualities of some of the chronicles that describe the Cade Rebellion. [Kaufman provides] insight into the competing ideologies of the chroniclers of the Cade Rebellion is a welcome application of theory to relatively neglected subject matter.' Journal of English and Germanic Philology

The Historical Literature of the Jack Cade Rebellion