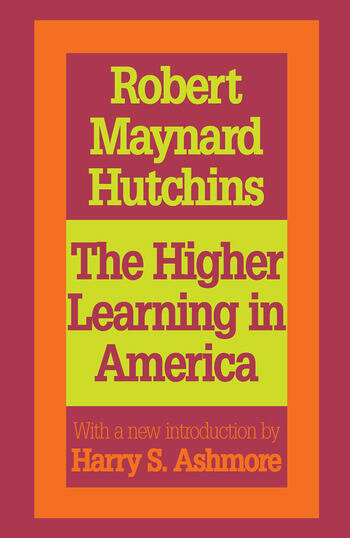 The Higher Learning in America: A Memorandum on the Conduct of Universities by Business Men

Perhaps the pivotal book in the reform of higher education in the United States, Robert M. Hutchins' classic is once again available, with a brilliant personal and professional appreciation by Harry S. Ashmore. When it was published in 1936The Higher Learning in Americabrought into focus the root causes of the controversies that still beset the nation's educational system. Taking office in 1929 as president of the University of Chicago, Hutchins began his tenure by declaring the learning available in even the most prestigious universities grossly deficient.

He cited himself as case in point. At Yale he had graduated at the top of his college class and set a record in the law school that led to appointment as professor and, at 26, promotion to dean. But he had acquired only "some knowledge of the Bible, of Shakespeare, andFaust,of one dialogue of Plato, and of the opinions of many semi-literate and a few literate judges, and that was about all."

The curricular reforms and administrative reorganization he undertook at Chicago are set forth in this volume, along with the philosophical arguments he worked out to explicate and defend his views. His goal was to reestablish the liberal arts and humanities as the basis for undergraduate education, consigning specialization and research to graduate and professional schools. Hutchins envisioned the university as a community of scholars who, in addition to teaching and research, provided independent thought and criticism of a society being rapidly transformed by science and technology. Challenging the educational establishment at every pertinent level, he became the most celebrated—and most controversial—intellectual of his era.

After twenty-two years at Chicago, Hutchins became associate director of the newly enriched Ford Foundation, where he was primarily responsible for the bold reforms sponsored by its Fund for the Advancement of Education and Fund for Adult Education. In 1960 he established the Center for the Study of Democratic Institutions at Santa Barbara to maintain an ongoing dialogue between scholars and practitioners that would "identify and clarify the basic issues of our time, and widen the circles of discussion about them."

The Higher Learning in America: A Memorandum on the Conduct of Universities by Business Men