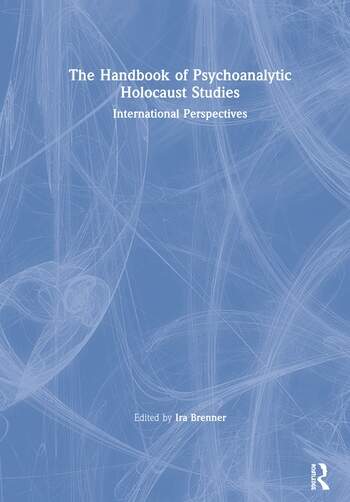 This book is a unique compilation of essays about the genocidal persecution fuelling the Nazi regime in World War II. Written by world-renowned experts in the field, it confronts a vitally important and exceedingly difficult topic with sensitivity, courage, and wisdom, furthering our understanding of the Holocaust/Shoah psychoanalytically, historically, and through the arts.

Authors from four continents offer their perspectives, clinical experiences, findings, and personal narratives on such subjects as resilience, remembrance, giving testimony, aging, and mourning. There is an emphasis on the intergenerational transmission of trauma of both the victims and the perpetrators, with chapters looking at the question of "evil", comparative studies, prevention, and the misuse of the Holocaust. Those chapters relating to therapy address the specific issues of the survivors, including the second and third generation, through psychoanalysis as well as other modalities, whilst the section on creativity and the arts looks at film, theater, poetry, opera, and writing.

The aftermath of the Holocaust demanded that psychoanalysis re-examine the importance of psychic trauma; those who first studied this darkest chapter in human history successfully challenged the long-held assumption that psychical reality was essentially the only reality to be considered. As a result, contemporary thought about trauma, dissociation, self psychology, and relational psychology were greatly influenced by these pioneers, whose ideas have evolved since then. This long-awaited text is the definitive update and elaboration of their original contributions.

SECTION IV - FROM THE DARK SIDE

Chapter 26...Holocaust as Weapon Against the Jews - Thane Rosenbaum

Ira Brenner, M.D., is Clinical Professor of Psychiatry at Sidney Kimmel Medical College of Thomas Jefferson University, and Training and Supervising Analyst at the Psychoanalytic Center of Philadelphia. He chairs the Holocaust Discussion Group at the meetings of the American Psychoanalytic Association, and has been widely recognized for his contributions to the field of psychic trauma.

"This book is an outstanding contribution to the existing panoply of publications that deal with the Holocaust and its horrific aftermath. Though much has been written and said on the subject, it adds an invaluable unique voice and perspectives. The usual areas of concern and focus – theoretical, clinical, transgenerational and cultural – are well represented, mostly from a lively contemporary psychoanalytic perspective. But its unique added value lies in that most of its outstanding international contributors speak deeply and movingly from their personal experience as it relates to the Holocaust and has affected and shaped their lives and thought. It is thus more than a mere scientific text – it is a testimony, collated and shaped by the painful and painstaking effort to make sense and meaning of what has come to be regarded as beyond comprehension. Reading it is an experience of moving personal absorption; it is a must reading for anyone who wishes to come closer to this most horrendous chapter of history." --H. Shmuel Erlich, Sigmund Freud Professor of Psychoanalysis (Emeritus), The Hebrew University of Jerusalem; Training and Supervising Analyst and Past-President, Israel Psychoanalytic Society; Chair, IPA Institutional Issues Committee; Author, The Couch in the Marketplace: Psychoanalysis and Social Reality

"Can we look to the future with a deeper understanding of the past? The Holocaust remains one of the most urgent, enigmatic and still incomprehensible events of the 20th century. This extraordinary and important volume is a "triumphant transformation of anguish into creativity" and a vital contribution and testament to humanity, as well as to the power of psychoanalytic thinking. Its profound, clinically illustrated studies address topics applicable to all human endeavors: mourning, resilience, inter-generational transmission of trauma and guilt, and, of course, the problem of evil and the very essence of human nature. It constantly reminds us that "Between the legislated suppression of memory, the deep psychological need to forget, the capacity for self-deception, and the fading of memory associated with the passage of time, it is an enormous personal and societal challenge to remember, never forget, stay mindful, own responsibility, and learn from the past." --Howard Levine, M.D., Editor-in-Chief, Routledge Wilfred R. Bion Studies Series

"Ira Brenner has hit the proverbial nail on its head by gathering a remarkable and diverse group of authors in this book. They have reviewed the vast literature related to the Holocaust and have masterfully used psychoanalytic tools to examine the impact of the horrendous tragedy from different perspectives. The result is a comprehensive and beautifully written book, essential reading, particularly for those of us who have directly experience the immensity of the pain suffered by the survivors of the Shoah. It is also for anyone who is interested in understanding the magnitude and the scope of other inexplicably inhuman tragedies such as this one and in finding ways to try to ensure that this history does not repeat itself. This is the book I have always been waiting to read." --Moises Lemlij, M.D., D. P.M., FRC Psych

"Ira Brenner takes us readers of this outstanding textbook into „the darkest corridor in human history." Internationally leading psychoanalysts and Holocaust researchers from four continents try to find a language for the unspeakable from very different perspectives. An indispensable book for practising psychoanalysts in the country of the perpetrators and anywhere as well as for citizens of a world once again threatened by anti-Semitism, xenophobia and right-wing radicalism." -- Prof. Dr. Marianne Leuzinger-Bohleber, University of Kassel/Mainz, Sigmund-Freud-Institut, Training Analyst oft eh German Psychoanalytical Association; Vice Chair of the International Research Board of the IPA

"This magnificent volume, broad in scope and detailed in focus, brings together a rich array of important and wise voices in the study of the Holocaust and its aftermath. Mostly grounded in their personal experience – always alive in ones touched by this unique atrocity – the authors’ moving and scholarly essays distil a lifetime’s work into compelling narratives and conceptualizations that, together, constitute a triumph of the creative spirit over the dark forces embodied in the Nazis’ "final solution". Beautifully conceived and masterfully put together, this inspirational book will become a classic – indispensable as an introduction and essential as a foundation for further study." –Fakhry Davids, Training Analyst, British Psychoanalytical Society, Author, Internal Racism: A Psychoanalytic Approach to Race and Difference