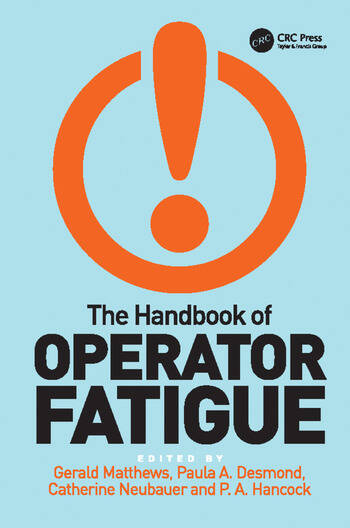 The Handbook of Operator Fatigue

Fatigue is a recognized problem in many facets of the human enterprise. It is not confined to any one area of activity but enters all situations in which humans have to perform for extended intervals of time. Most problematic are the circumstances in which obligatory action is continuous and the results of failure are evidently serious or even catastrophic. Therefore, the modern media especially highlights fatigue-related failures in industries such as transportation, materials processing and healthcare. It can be, and indeed is, no coincidence that most of the spectacular failures in process control that have resulted in the world's largest industrial accidents have occurred in the small hours of the morning when the circadian rhythm is lowest and operator fatigue itself peaks. While there have been legislative efforts made at state, federal and international levels to regulate working hours of employees, the appropriate implementation of such legislation is still a long way off. The Handbook of Operator Fatigue provides a comprehensive account of the subject to serve as the definitive reference work for researchers, students and practitioners alike. The volume features 30 chapters written by experts from around the world to address each important facet of fatigue, including: the scale of the fatigue problem (Section I), the nature of fatigue (Section II), how to assess fatigue (Section III), the impact of fatigue on health (Section IV), fatigue in the workplace (Section V), the neurological basis of fatigue (VI), sleep disorders (VII), and the design of countermeasures to fatigue (VIII).

Gerald Matthews is Professor of Psychology at the University of Cincinnati. He obtained his Ph.D. from Cambridge University in 1984, and he has previously held faculty positions at Aston University and the University of Dundee in the UK. His research focuses on human performance, cognitive models of personality, the assessment of acute states of stress and fatigue, and emotional intelligence. He has published over 150 journal articles and book chapters on these topics. He has co-authored books on Attention and Emotion: A Clinical Perspective, Personality Traits, Human Performance: Cognition, Stress and Individual Differences and Emotional Intelligence: Science and Myth. His book on Attention and Emotion won the 1998 British Psychological Society Book Award. He is also editor of Cognitive Science Perspectives on Personality and Emotion and co-editor of The Science of Emotional Intelligence. He has been elected Secretary-Treasurer of the International Society for the Study of Individual Differences, Chair of the Individual Differences in Performance Technical Group of the Human Factors and Ergonomics Society, and President-Elect of the Traffic and Transportation Division of the International Association for Applied Psychology. He has acted as a consultant for several organizations, including Procter & Gamble and the MIT Electronics Research Lab. He is also an associate editor for Personality and Individual Differences, and a consulting editor for the Journal of Experimental Psychology: Applied. Paula Desmond is a senior usability engineer at Dell, Inc. She holds degrees in Human Factors Engineering from Aston University and the University of Dundee in the UK . She has held research positions at the University of Minnesota and Texas Tech Health Sciences Center, and she has held faculty positions in Human Factors Engineering at Southwestern University and Texas Tech University. Catherine Neubauer is a Ph.D. student in the psychology department at the University of Cincinnati. She received her B.S. in psychology from the University of Central Florida in 2008 SA Peter Hancock is Provost Distinguished Research Professor in the Department of Psychology, the Institute for Simulation and Training, and the Department of Civil and Environmental Engineering at the University of Central Florida. Previously, he was the founder and Director of the Human Factors Research Laboratory at the University of Minnesota where he held appointments in the Departments of Computer Science and Electrical Engineering, Mechanical Engineering, Psychology, and Kinesiology as well as at the Cognitive Science Center and the Center on Aging Research. He currently holds as an Adjunct Senior Research Scientist at the Transportation Institute of the University of Michigan. His work has garnered over $15 million dollars in externally funded research awards and he is the author of more than 400 refereed scientific articles and publications as well as writing and editing a number of books. He has received various awards for his work, among them the Franklin V. Taylor Award of the American Psychological Association, the Liberty Mutual Prize from the International Ergonomics Association, the Jack Kraft Award of the Human Factors and Ergonomics Society and the Sir Frederic Bartlett Medal of the Ergonomics Society of Great Britain for lifetime achievement. In 2006 he was named the Norbert Wiener Award winner of the IEEE Systems, Man, and Cybernetics Society, its highest technical award. Peter is a Fellow, and past President, of the Human Factors and Ergonomics Society.

’This is a comprehensive, academic account of a ’hidden killer’ and one which deserves study. More than that though, organisations should take its lessons to heart and act on them.’ The ROSPA Occupational Safety & Health Journal, January 2013

The Handbook of Operator Fatigue