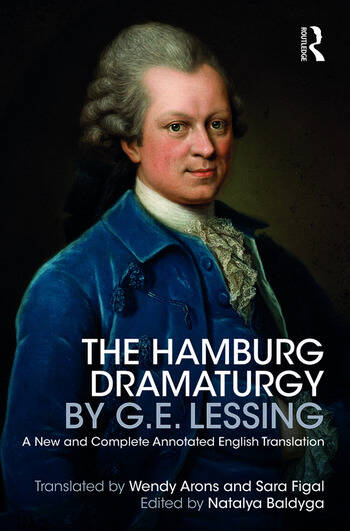 The Hamburg Dramaturgy by G.E. Lessing: A New and Complete Annotated English Translation

While eighteenth-century playwright and critic Gotthold Ephraim Lessing made numerous contributions in his lifetime to the theater, the text that best documents his dynamic and shifting views on dramatic theory is also that which continues to resonate with later generations – the Hamburg Dramaturgy (Hamburgische Dramaturgie, 1767–69). This collection of 104 short essays represents one of the eighteenth century’s most important critical engagements with the theater and its potential to promote humanistic discourse. Lessing’s essays are an immensely erudite, deeply engaged, witty, ironic, and occasionally scathing investigation of European theatrical culture, bolstered by deep analysis of Aristotelian dramatic theory and utopian visions of theater as a vehicle for human connection.

This is the first complete English translation of Lessing's text, with extensive annotations that place the work in its historical context. For the first time, English-language readers can trace primary source references and link Lessing’s observations on drama, theory, and performance not only to the plays he discusses, but also to dramatic criticism and acting theory. This volume also includes three introductory essays that situate Lessing’s work both within his historical time period and in terms of his influence on Enlightenment and post-Enlightenment theater and criticism.

The newly translated Hamburg Dramaturgy will speak to dramaturgs, directors, and humanities scholars who see theater not only for entertainment, but also for philosophical and political debate.

A Note on the Original Author

Missions, Misunderstandings, and Mythologies: The Relationship between the Hamburg Dramaturgy and the Hamburg National Theater by Natalya Baldyga

"We have actors, but no art of acting": Performance Theory and Theatrical Emotion in the Hamburg Dramaturgy by Natalya Baldyga

The Legacy of the Hamburg Dramaturgy by Michael M. Chemers

Note on the Translation by Wendy Arons and Sara Figal

Notes to the Paralipomena

Gotthold Ephraim Lessing (1729–81) was a playwright, critic, and philosopher of the German Enlightenment. His plays include Miss Sara Sampson, Minna von Barnhelm, Emilia Galotti, and Nathan the Wise. In addition to the Hamburg Dramaturgy, Lessing is known for his masterpiece of aesthetic theory, Laocoon: An Essay on the Limits of Painting and Poetry.

’s research centers on eighteenth-century German literature and history. She is the author of Heredity, Race, and the Birth of the Modern (Routledge, 2011 and 2008) and co-editor, with Mark Larrimore, of The German Invention of Race (SUNY Press, 2007 and 2006).

The Hamburg Dramaturgy by G.E. Lessing: A New and Complete Annotated English Translation