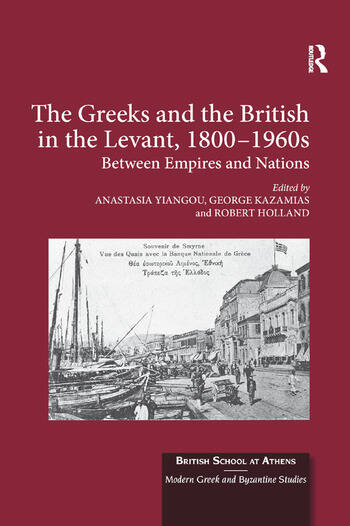 The Greeks and the British in the Levant, 1800-1960s: Between Empires and Nations

This book explores the concept of ‘the Levant’ as a component of the regional and international system during the age of imperialism. At its heart is a focus on the experience of Greek-speaking societies and, above all, the independent state of Greece that came into existence in 1830. A key sub-theme running through the account is the Anglo-Hellenic connection stemming from an enhanced British presence in the Eastern Mediterranean from the 1830s and 1840s, and in particular its relationship to the Greek polity. Within this framework the emergence of the idea of ‘Greater Greece’ is integrated into the narrative, including its regional reverberations and ethnic tensions. Other contributions examine trade and finance, gender issues, colonialism and the distinctive experience of Cyprus.

The core of the volume deals centrally with three interlocking themes: modernity, nationalism and trans-nationalism. Ultimately these forces were to prove at odds with the ambiguity and elite structures that characterized the Levant in its nineteenth-century heyday. The book analyses the evolution, and increasing definition from the late 1950s, of Greece’s modern European identity, while taking into account the magnetic force of other relationships and regional links. This treatment connects with the choices and dilemmas facing Greece and its surrounding region, which contemporary crises invariably throw into relief. It will be of interest both to specialised historians and students of current affairs seeking to understand the broader historical context.

Introduction / Part I The Levant: Dilemmas of Modernity: The Levant as a middle ground, Darwin / Why the Levant?, Holland / The claim to enter modernity: the Greek national programme in perspective, Hatzivassiliou / Greece’s westernizers: K. Tsatsos, P. Kanellopoulos and G. Theotokas on Greece’s cultural and political orientation, Kourkouvelas / Maidens and matrons, ladies and labourers: tradition and innovation in Greek women’s lives in the longue durée, Angelomatis-Tsougarakis / Part II The Anglo-Hellenic Connection: Bailed in: strategy, finance and the acquisition of Cyprus, 1878, Markides / Disraeli, ‘the key of western Asia’ and the echoes of history in the Levant, Kyriakides / Cyprus’ trade with the Levant, 1881-1946/7, Kazamias – Panayiotou / ‘The smell of Smyrna … is neither a Greek nor a Moslem smell.’ Toynbee, Greece and the Levant, Clogg / The British in the Levant during the 1940s: the experience of Cyprus and the Dodecanese, Yiangou / ‘Don’t let us spoil the ship for a ha’p’oth of heretics’. Identity issues in the British colony of Cyprus. The final settlement, Hamatsou / Merchants - consuls and intermediary service in the 19th century eastern Mediterranean, Chatziioannou / Part III Ambiguous Relationships in the Greek Levant: The Levant as a vanishing mirage: a tale of three cities, Mavrogordatos / Greater Greece in the early 20th century: Crete, Cyprus, Constantinople, Llewellyn-Smith / Greek policy in the Levant and the Greek community of Alexandria, 1947-1961, Koumas / Select bibliography / Index.

Anastasia Yiangou specializes on the history of British rule in Cyprus with a focus on the period of the Second World War and after. She is the author of Cyprus in World War II: Politics and Conflict in the Eastern Mediterranean (2010). She has taught at the University of Cyprus and the Open University Cyprus.

George Kazamias is Associate Professor in the Department of History and Archaeology, University of Cyprus and former Dean of the Faculty of Letters (2011-2014). His research focuses on the relations of Greece with Britain in the 20th century, post-1960 Cyprus, oral history and the history of the Hellenic Diaspora.

Robert Holland is an historian of the British Empire, with a special interest in the Mediterranean. He has published widely on Cyprus and on Anglo-Hellenic relations generally, including Britain and the Cyprus Revolt, 1954-59 (1998). He is a Visiting Professor at the Centre for Hellenic Studies, King’s College London. 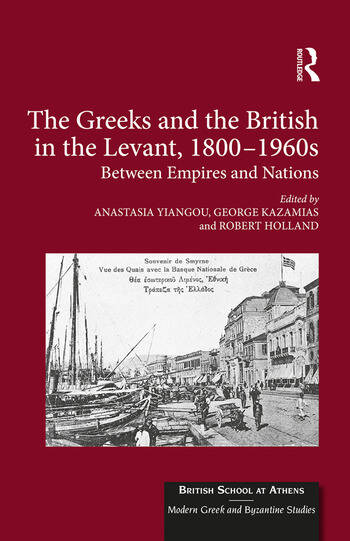 The Greeks and the British in the Levant, 1800-1960s: Between Empires and Nations