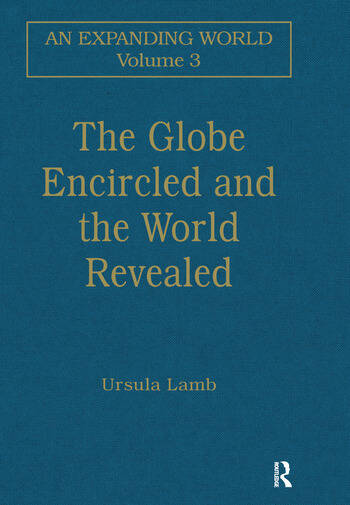 The Globe Encircled and the World Revealed

This volume reflects the advances in research and methodology that have been made since 1960, as well as the increasing number of topics covered by the historiography of the European expansion. The studies selected demonstrate the range of this material, focusing in particular on the beginnings of trans-oceanic expansion by the Iberian powers. The volume has the further purpose of showing how the early encounters set precedents for subsequent patterns of interaction.

Contents: Introduction; Part I: On the way to the East- Portuguese communication with Africans on the searoute to India, Jeanne Hein; Wishes and facts - the evaluation of Columbus’ ’India’ project by Portuguese and Spanish cosmographers in the light of the geographic science of the time, W. G. L. Randles; In search of meaning - the certainty of Columbus: some recent studies, John Larner; Significance of interpretation- the meaning of ’discovery’ in the 15th and 16th centuries, Wilcomb E. Washburn; Part II: Key to the terraquaeus globe -"the strait that shall forever bear his name": October-November 1520, Samuel Eliot Morison; Mariner’s world - seamen ashore and afloat: the social environment of the Carreira da India,1550-1750, A. J. R. Russell-Wood; Arrival and conflict - conquest and so-called conquest in Spain and Spanish America, Charles Gibson; Nature responds - America as model: the demographic impact of European expansion upon the non-European world, Woodrow W. Borah; Atlantic becomes familiar - generalizations: European source regions, D. W. Meinig; Part III: City in Spain - Seville in the 16th century, Ruth Pike; City in America - Tenochtitlan: the public image, Inga Clendinnen; Mission to save souls - faith and empire: the cross and the crown in Portuguese expansion, 15th to 18th centuries, C. R. Boxer; Intent and effect of colonization - a secular sense of responsibility, John H. Parry; Instrument for the voiceless - Indian riots and rebellions in colonial central America, 1530-1720, Murdo J. MacLeod; Impact blunted for Europe - Renaissance Europe and America: a blunted impact?, John H. Elliott; Index.

The Globe Encircled and the World Revealed