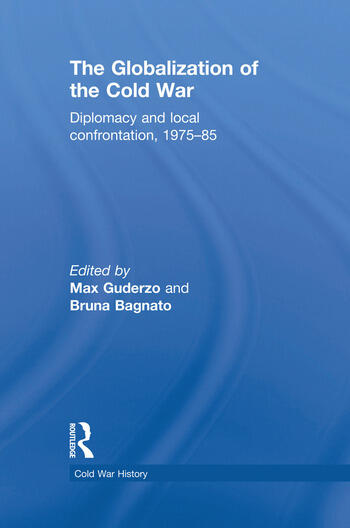 The Globalization of the Cold War: Diplomacy and Local Confrontation, 1975-85

This book focuses on the globalisation of the Cold War in the years 1975-85, highlighting the transformation from bipolar US-Soviet competition to global confrontation.

Offering a detailed analysis of this fundamental shift that occurred during this period, as well as the interconnections of this process with the new industrial-technological revolution, this book demonstrates how the United States returned to a position of global economic leadership. In so doing, the book aims to challenge the traditional and misleading paradigm that interprets the gradual development of the Cold War in basic bipolar terms; in fact, most of the factors triggering superpower attitudes and interplay were linked to a complex web of relations with their allies, as well as to the political, economic, social, ideological and military factors structurally intrinsic to the ‘peripheral’ regions where the confrontation actually took place.

Many of the essays in this volume focus on the foreign and security policies of the United States, with the aim of reassessing the Carter administration as the foundation for Reagan’s final show-down with the Soviet Union. The contributors, however, go beyond the traditional patterns of foreign policy analysis, giving due attention to transnational phenomena and institutional histories that better explain the gradual transformation in the years that prepared the world for the post-Cold War globalisation era.

This book will be of much interest to students of Cold War studies, international history, US foreign policy, European politics and IR in general.

Bruna Bagnato is Associate Professor of the History of International Relations at the University of Florence.

Introduction Bruna Bagnato and Max Guderzo  Part 1: The Latin American Arena  1. Carter’s New Look: US Foreign Policy in Latin America, 1977-80 Max Guderzo  2. Operation Urgent Fury: The Shift from Rhetorical to Military Offensive in Reagan’s Global Rollback of Communism Stefano Luconi  Part 2: African Challenges  3. Libya, the United States and the Soviet Union: From the Rise of Qadhafi to Ronald Reagan’s Policy of Pressure Massimiliano Cricco  4. Human Rights versus Cold War: The Horn of Africa, Southwest Asia and the Emergence of the Carter Doctrine Barbara Zanchetta  5. Carter and the African Morass: US Policy and the Failure of the State-Building Process in Angola and the Congo Maria Stella Rognoni  6. East-South Relations in the 1970s and the GDR Involvement in Africa: Between Bloc Loyalty and Self-Interest Sara Lorenzini  Part 3: War and Peace in Asia  7. The United States and the Iran-Iraq War: The Limits of American Influence Malcolm Byrne  8. The United States and the Third World in the Carter Years: The Case of India Mariele Merlati  9. The Sino-American Entente of 1978-9 and Its ‘Baptism of Fire’ in Indochina Enrico Fardella  Part 4: A Different World  10. The International System after the End of the Cold War Ennio Di Nolfo

Bruna Bagnato is Associate Professor of the History of International Relations at the University of Florence.

The Globalization of the Cold War: Diplomacy and Local Confrontation, 1975-85