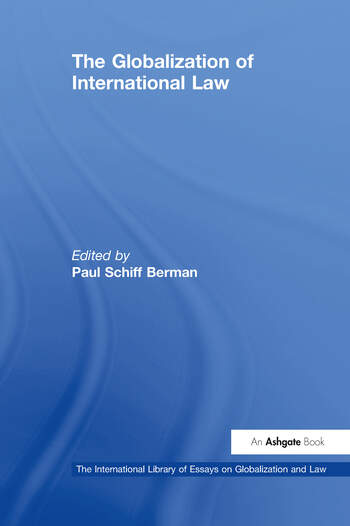 The Globalization of International Law

'International law' is no longer a sufficient rubric to describe the complexities of law in an era of globalization. Accordingly, this collection situates cross-border norm development at the intersection of interdisciplinary scholarship on comparative law, conflict of laws, civil procedure, cyberlaw, legal pluralism and the cultural analysis of law, as well as traditional international law. It provides a broad range of seminal articles on transnational law-making, governmental and non-governmental networks, judicial influence and cooperation across borders, the dialectical relationships among national, international and non-state legal norms, and the possibilities of 'bottom-up' and plural law-making processes. The introduction situates these articles within the framework of law and globalization and suggests four important ways in which such a framework enlarges the traditional focus of international law. This book, therefore, provides a crucial reference for scholars and practitioners seeking to understand the varied processes of norm development in the emerging global legal order.

'...a good book presenting a collection of a number of important articles on various fields of international law.' Contemporary Journal of International Criminal Law, 2007

The Globalization of International Law