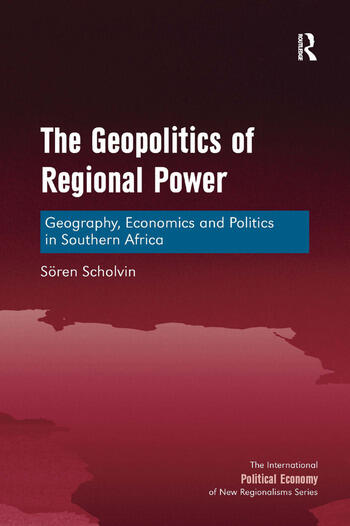 The Geopolitics of Regional Power: Geography, Economics and Politics in Southern Africa

In the last two decades, various states from the Global South have emerged as important players in international relations. Most popular among them is China. Brazil, India and South Africa have also taken essential roles in global and regional politics. Compared to traditional great powers, they can be labelled ’regional great powers’ or ’regional powers’ because their influence is - with the exception of China - concentrated on their neighbourhood. The impact of regions, meaning the impact of geography, on the economics and politics of regional powers is surprisingly understudied. This book analyses how geographical conditions influence the regional economics and politics of South Africa, allowing the author to delineate its region of influence.

SÃ¶ren Scholvin (PhD, University of Hamburg) is a research fellow at the Institute of Economic and Cultural Geography at Leibniz UniversitÃ¤t Hannover, Germany. He is also an associated researcher at the GIGA Institute of African Affairs, Hamburg. His research interests are the geopolitics/geoeconomics of Brazil and South Africa, the energy policy of emerging economies, regional economic integration in sub-Saharan Africa, and South American and sub-Saharan African global cities as nodes in regional and global commodity chains.

’Regional powers play critical roles in shaping the destinies of the geopolitical regions in which they are located, as well as influencing events outside the region. Soren Scholvin’s study of South Africa and its neighbors breaks new ground methodologically in its systematic analysis of the interaction between political-economic processes and regional geographical patterns. It will be valuable to scholars of political geography and international relations who focus on geopolitical theory and its practice.’ Saul B. Cohen, City University of New York, USA ’Here, at long last, is a scholar who takes us back to basics in the study of South Africa's regional powerhood in Southern Africa. Soren Scholvin's modernised version of Geopolitics highlights often overlooked determinants of South Africa's regional economic and political relations, like climatological and geological factors. Realist Geopolitics, as he calls his sophisticated theoretical perspective, has a relevance far beyond South Africa and its neighbourhood. The author has crafted an analytical tool that could also help us understand the conduct of other regional powers in the Global South.’ Deon Geldenhuys, University of Johannesburg, South Africa ’It is one of the tragedies of the professionalization of academic disciplines that Geography and Political Science have drifted apart and nowadays seldom engage. The notion of regional power�, so insightfully analysed and applied to Southern Africa in this study, provides an excellent opportunity for geographers and political scientists to bridge this divide creatively and to their mutual benefit.’ Philip Nel, University of Otago, New Zealand

The Geopolitics of Regional Power: Geography, Economics and Politics in Southern Africa