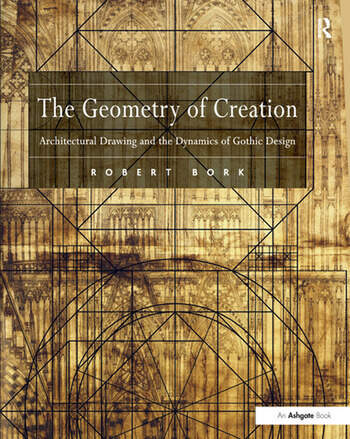 The Geometry of Creation: Architectural Drawing and the Dynamics of Gothic Design

The flowering of Gothic architecture depended to a striking extent on the use of drawing as a tool of design. By drawing precise "blueprints" with simple tools such as the compass and straightedge, Gothic draftsmen were able to develop a linearized architecture of unprecedented complexity and sophistication. Examination of their surviving drawings can provide valuable and remarkably intimate information about the Gothic design process. Gothic drawings include compass pricks, uninked construction lines, and other telltale traces of the draftsman's geometrically based working method. The proportions of the drawings, moreover, are those actually intended by the designer, uncompromised by errors introduced in the construction process. All of these features make these drawings ideal subjects for the study of Gothic design practice, but their geometry has to date received little systematic attention. This book offers a new perspective on Gothic architectural creativity. It shows, in a series of rigorous geometrical case studies, how Gothic design evolved over time, in two senses: in the hours of the draftsman's labor, and across the centuries of the late Middle Ages. In each case study, a series of computer graphics show in unprecedented detail how a medieval designer could have developed his architectural concept step by step, using only basic geometrical operations. Taken together, these analyses demonstrate both remarkable methodological continuity across the Gothic era, and the progressive development of new and sophisticated permutations on venerable design themes. This rich tradition ultimately gave way in the Renaissance not because of any inherent problem with Gothic architecture, but because the visual language of Classicism appealed more directly to the pretensions of Humanist princes than the more abstract geometrical order of Gothic design, as the book's final chapter demonstrates.

Contents: Introduction: geometry and the Gothic design process; The origins of Gothic architectural drawing; The flowering of rayonnant drawing in the Rhineland; Italian drawings up to 1350; Germanic tower drawings and the elaboration of tradition; Wider horizons; The Italian Challenge to the Gothic design system; Conclusion: Gothic drawings as traces of the creative process; Bibliography; Index.

'This is an exceptional book that casts new light on the design processes of medieval architects. Bork has taken the radical and novel step of looking at surviving medieval drawings in the hope of finding the geometrical logic behind their structures and decorations. The results have been spectacular. He can plot the lines the original designers actually used in developing their geometric schemes, and he does so with a sharpness of vision unmatched by any of his predecessors in the field. Bork is able to show a remarkable continuity of design practice in medieval architecture, from Villard de Honnecourt to Lorenz Lechler. Paul Frankl had already said as much, but no one before Bork has demonstrated it in such detail and with such authority.' Professor Paul Crossley, The Courtauld Institute of Art With his meticulous and creative study of dozens of drawings prepared by the master builders of Gothic cathedrals, Robert Bork makes a convincing case for a dynamic relationship between that Gothic "look" and the processes of creation. Animated by compasses and straightedge, geometric forms - especially squares, octagons and hexagons - seem to take on a life of their own, ordering the principal outlines of the yet-to-be-built church. This book will provide an invaluable resource for all students and lovers of Gothic architecture. Stephen Murray, Columbia University Robert Bork's impressive and rigorous analysis of the most spectacular medieval parchment drawings demonstrates that the shape and proportions of great Gothic churches arose from the assembly of accurately regulated geometrical figures, and that these figures were applied to faÃ§ade and ground plan designs by routines that circulated widely in the Gothic world. Thus, Bork's investigation lets us literally see behind the curtain of the medieval builder's studio. It reveals geometry as the key to a deeper understanding of the way medieval monuments were generated by architects eager to establish their profession

The Geometry of Creation: Architectural Drawing and the Dynamics of Gothic Design