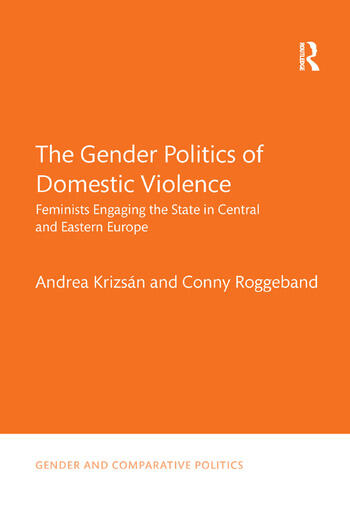 The Gender Politics of Domestic Violence: Feminists Engaging the State in Central and Eastern Europe

What are the factors that shape domestic violence policy change and how are variable gendered meanings produced in these policies? How and when can feminists influence policy making? What conditions and policy mechanisms lead to progressive change and which ones block it or lead to reversal?

The Gender Politics of Domestic Violence  analyzes the emergence of gender equality sensitive domestic violence policy reforms in Central and Eastern Europe (CEE). Tracing policy developments in Eastern Europe from the beginning of 2000s, when domestic violence first emerged on policy agendas, until 2015, Andrea Krizsán and Conny Roggeband look into the contestation that takes place between women’s movements, states and actors opposing gender equality to explain the differences in gender equality sensitive policy outputs across the region.

They point to regionally specific patterns of feminist engagement with the state in which coalition-building between women’s organizations and establishing alliances with different state actors were critical for achieving gendered policy progress. In addition, they demonstrate how discursive contexts shaped by democratization frames and opposition to gender equality, led to differences in the politicization of gender equality, making gender friendly reforms more feasible in some countries than others.

5. Comparing Women’s Movements Across the Region

6. How Does Gender Disappear and Reappear in Domestic Violence Policy Regimes

Andrea Krizsán is a Research Fellow at the Center for Policy Studies, Central European University, Budapest. Her research focuses on the comparative politics of gender inequality and violence against women and intersectionality in Central and Eastern Europe.

lectures at the Department of Political Science at the University of Amsterdam. Her research interests include gender mainstreaming and equality policies, gender-based violence, social movements and transnational feminist networking.

'Placing violence against women on the global human rights agenda is one of the most impressive successes of the international women’s rights movement. By 2015, the overwhelming majority of countries in Central and Eastern Europe that are also currently members of the European Union had adopted laws addressing domestic violence. Yet despite their common origins in state socialism and their exit from it, the authors and editors of this book skillfully show that, twenty-five years after the collapse of the Berlin wall, domestic violence policy in these countries is characterized by major differences. Using interpretive policy analysis, they find the reasons for these differences and their implications for women’s rights in the domestic politics of these countries. In doing so, they make a substantial contribution to the literatures on human rights, on violence against women, on gender and politics, and on transitions to democracy.' - Sidney Tarrow, author of Power in Movement (2011)

'Born of critical frame analysis as one of the heirs of the EU-funded multinational QUING project and nourished with extensive interviews with policy actors and movement activists, this comparative project on Central and East Europe (CEE) matured into a strong book on feminist social action and democratic change. One need not be a scholar of CEE politics to benefit from Krizsán and Roggeband’s searching analysis of why and how such superficially similar states moved in different directions and how feminist efforts to influence policy in any human rights regime can be ignored, coopted or even sometimes effective. The authors demonstrate that effectiveness is not measured in the number of laws or programs but whether the essential gender connection is drawn to prevent abuse and protect women.' - Myra Marx Ferree, Alice H. Cook Professor of Sociology, University of Wisconsin-Madison

The Gender Politics of Domestic Violence: Feminists Engaging the State in Central and Eastern Europe