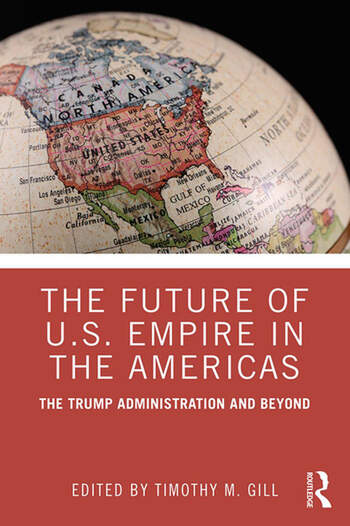 The Future of U.S. Empire in the Americas: The Trump Administration and Beyond

With the rise of President Trump, many are coming to question where the United States (U.S.) is headed and, whether we might witness an imperial decline under Trump. Social scientists largely recognize the contemporary hegemonic position of the U.S. at the global level, but questions persist concerning the future of the U.S. Empire. With the Trump Administration at the helm, these questions are all the more salient.

Drawing on the expertise of a panel of contributors and guided by Michael Mann’s model of power, this book critically interrogates the future of U.S. global power and provides insights on what we might expect from the U.S. Empire under Trump. Recognizing that U.S. imperial power involves an array of sources of power (ideological, economic, military, and political), the contributors analyze the Trump Administration’s approach towards nine countries in the Western Hemisphere, and five sets of global policies, including inter-American relations, drugs, trade, the environment, and immigration. Each case presents a historical look at the trajectory of relations as they have developed under Trump and what we might expect in the future from the administration.

The Future of U.S. Empire in the Americas will be of great interest to students and scholars of U.S. foreign policy, Foreign Policy Analysis, political sociology, and American politics.

1. The State of U.S. Empire in the Americas under the Trump Administration

2. Self-Interest, Prejudice, and Liberalism: A History of U.S. Empire in the Americas

3. Trump and Venezuela: Return to the Monroe Doctrine

4. From Hostility to Engagement—and Back: U.S. Policy towards Cuba under the Obama and Trump Administrations

5. U.S.–Mexico Relations in the Trump Era and Beyond: Racial Capitalism Rearticulated

6. The More Things Change: Continuities in U.S. Foreign Policy toward Nicaragua under the Trump Administration

7. Trumping the Agenda? Continuity and Discontinuity in Foreign Affairs in U.S.–Colombia Relations

8. Donald Trump and U.S. Global Power: A View from Argentina

9. The Empire Strikes Back: U.S.–Brazil Relations from Obama to Trump

11. Trump and the Continuation of American Empire in Haiti

12. Reaching the Boiling Point: Energy and Climate Policy under the Trump Administration

14. Trump and U.S. Drug Policy in the Americas: No End in Sight of War and Repression

16. Inter-American Relations in the Trump Era: Holding Autonomy behind the Wall

Timothy M. Gill is an assistant professor of sociology at the University of North Carolina at Wilmington. He has published within both academic and public outlets on topics including Venezuelan politics, U.S. global empire, and sociological theory.

"Gill assembled a top-notch and diverse group of scholars to examine the state of U.S. empire in Latin America in the Donald Trump era. This timely and comprehensive volume is a worthy addition to the debate over shifts in U.S. influence in the region."—Gregory Weeks, University of North Carolina at Charlotte

The Future of U.S. Empire in the Americas: The Trump Administration and Beyond