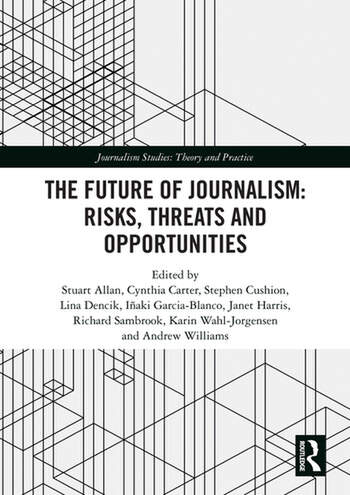 The Future of Journalism: Risks, Threats and Opportunities

This volume draws together research originally presented at the 2015 Future of Journalism conference at Cardiff University, UK. The conference theme, ‘Risks, Threats and Opportunities,’ highlighted five areas of particular concern for discussion and debate.

The first of these areas, ‘Journalism and Social Media’, explores how journalism and the role of the journalist are being redefined in the digital age of social networking, crowd-sourcing and ‘big data’, and how the influence of media like Twitter, Facebook, YouTube, Instagram, and Reddit affects the gathering, reporting or consumption of news? ‘Journalists at Risk’ assesses the key issues surrounding journalists’ safety and their right to report, as news organizations and their sources are increasingly targeted in war, conflict or crisis situations. The third area, ‘Journalism Under Surveillance’, asks what freedom of the press means in a post-Snowden climate. What are the new forms of censorship confronting journalism today, and what emergent tactics will help it to speak truth to power?

‘Journalism and the Fifth Estate’ examines the traditional ideals of the fourth estate, which risk looking outdated, if not obsolete, in the modern world. How much can we rely on citizen media to produce alternative forms of news reporting, and how can we reform mainstream media institutions to make them more open, transparent and accountable to the public? The final area, ‘Journalism’s Values’, asks how journalism’s ethical principles and moral standards are evolving in relation to the democratic cultures of communities locally, regionally, nationally or internationally. What are the implications of changing priorities for the education, training and employment of tomorrow’s journalists?

Every chapter in this volume engages with a pressing issue for the future of journalism, offering an original, thought-provoking perspective intended to help facilitate further dialogue and debate. The chapters in this book were originally published in special issues of Digital Journalism, Journalism Practice, and Journalism Studies.

6. Twitter as a flexible tool: How the job role of the journalist influences tweeting habits Lily Canter and Daniel Brookes

7. The anatomy of leaking in the age of megaleaks: New triggers, old news practices Zvi Reich and Aviv Barnoy

8. Social News = Journalism Evolution? How the integration of UGC into newswork helps and hinders the role of the journalist Lisette Johnston

10. Who shares what with whom and why? News sharing profiles amongst Flemish news users Ike Picone, Ralf De Wolf and Sarie Robijt

13. Towards a New Model for Journalism Education Dan Gillmor

17. Are you talking to me? An analysis of journalism conversation on social media Martin J. Chorley and Glyn Mottershead

24. Mixed Messages: An investigation into the discursive construction of journalism as a practice Sally Reardon

28. Folk Theories of Journalism: The many faces of a local newspaper Rasmus Kleis Nielsen

30. Cosmopolitan Journalists? Global journalism in the work and visions of journalists Johan Lindell and Michael Karlsson

31. Participation and the Blurring Values of Journalism Jaana Hujanen

33. What makes a good journalist? Empathy as a central resource in journalistic work practice Antje Glück

36. Power to the Virtuous? Civic culture in the changing digital terrain Kristy Hess

The editors of this book are based in the School of Journalism, Media and Culture at Cardiff University, UK.

The Future of Journalism: Risks, Threats and Opportunities