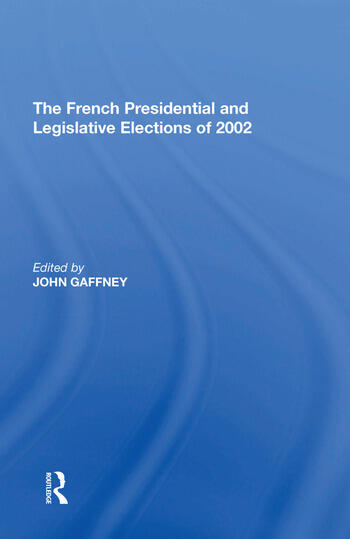 The French Presidential and Legislative Elections of 2002

The French elections of 2002 provided an opportunity to assess the political development of the regime, and in particular developments within the complex phenomenon of French presidentialism within a party system. In this thorough analysis, John Gaffney looks at the institutional, political and electoral 'moments' of 2002, which saw both presidential and legislative elections and a major upheaval in the political life of France. Bringing together a range of scholars, the volume includes contributions from historians, political scientists, economists, cultural studies experts and media experts to offer a thorough and textured analysis of French politics.

Contents: The 2002 elections in institutional and comparative perspective, John Gaffney; Presidential competition: Prime Minister against President in 'cohabitation', David S. Bell; The presidential and legislative election campaigns of 2002: a strange play in four acts, Alistair Cole; The presidential and legislative elections of 2002: an analysis of the results, Colette Ysmal; The media and the elections, Raymond Kuhn; The television campaigns for the French elections of 2002, Ir Hill; Jacques Chirac's campaign: President in spite of himself?, Steven Griggs; Lionel Jospin's campaign and the Socialist Left: the 'earthquake' and its aftershocks, Ben Clift; Jean-Marie Le Pen and the Front National: crisis and recovery, Catherine Fieschi; The Greens 2002: coming down to earth, Florence Faucher; Rhetorical divergence: real convergence? The economic policy debate in the 2002 French presidential and legislative elections, David Howarth; In search of lost women: alternative political maps in the presidential election of 2002, Hilary Footitt; The effects of gender parity in elections: the French case, Karen Bird; 'Europe' in the 2002 French elections, Helen Drake; Election dynamics, party system change and regime evolution in the 2002 elections, Joseph Szarka; A crisis of democracy?, Nick Hewlett; Chronology of events, January - June 2002, Nathalie Collomb-Robert; Index.

The French Presidential and Legislative Elections of 2002