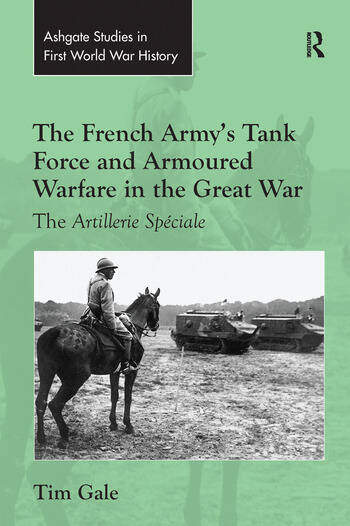 The French Army's Tank Force and Armoured Warfare in the Great War: The Artillerie Spéciale

Recent scholarship has challenged the assumption that military commanders during the First World War were inflexible, backward-looking and unwilling to exploit new technologies. Instead a very different picture is now emerging of armies desperately looking to a wide range of often untested and immature scientific and technological innovations to help break the deadlock of the Western Front. Nowhere is this better illustrated than in the development of tank warfare, which both the British and the French hoped would give them a decisive edge in their offensives of 1917 and 1918. Whilst the British efforts to develop armoured warfare have been well chronicled, there has been no academic study in English on the French tank force - the Artillerie Spéciale - during the Great War. As such, this book provides a welcome new perspective on an important but much misunderstood area of the war. Such was the scale of the French tanks’ failure in their first engagement in 1917, it was rumoured that the Artillerie Spéciale was in danger of being disbanded, yet, by the end of the war it was the world’s largest and most technologically advanced tank force. This work examines this important facet of the French army’s performance in the First World War, arguing that the AS fought the war in as intelligent and sensible a manner as was possible, given the immature state of the technology available. No amount of sound tank doctrine could compensate for the fragility of the material, for the paucity of battlefield communication equipment and for the lack of tank-infantry training opportunities. Only by 1918 was the French army equipped with enough reliable tanks, as well as aircraft and heavy-artillery, to begin to exercise a mastery of the new form of combined-arms warfare. The successful French armoured effort outlined in this study (including a listing of all the combat engagements of the French tank service in the Great War) highlights a level of military effectiveness within

Dr Tim Gale undertook his doctoral research on the French tank service (the Artillerie Spéciale) at the Department of War Studies, King’s College, under the supervision of Professor William Philpott. His interests continue to be the Artillerie Spéciale and other aspects of French Army in the Great War. His current research is on the wartime career of one of France’s most controversial generals, Charles Mangin. He is a member of the First World War Tactics and Operations Group (KCL) and is the Honorary Treasurer of the British Commission for Military History. Forthcoming work includes chapters on the development of French tank doctrine in the Great War, General Charles Mangin, General Estienne of the Artillerie Spéciale, as well as one about the post-war life of the Renault light tank.

The French Army's Tank Force and Armoured Warfare in the Great War: The Artillerie Spéciale