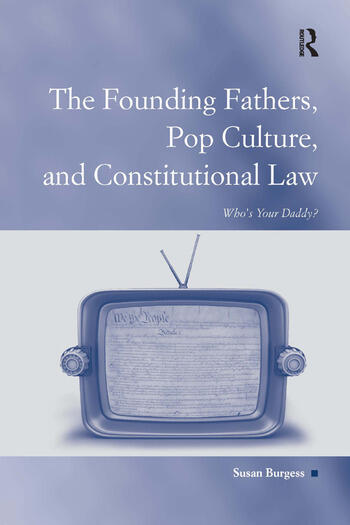 The Founding Fathers, Pop Culture, and Constitutional Law: Who's Your Daddy?

Applying innovative interpretive strategies drawn from cultural studies, this book considers the perennial question of law and politics: what role do the founding fathers play in legitimizing contemporary judicial review? Susan Burgess uses narrative analysis, popular culture, parody, and queer theory to better understand and to reconstitute the traditional relationship between fatherhood and judicial review. Unlike traditional, top-down public law analyses that focus on elite decision making by courts, legislatures, or executives, this volume explores the representation of law and legitimacy in various sites of popular culture. To this end, soap operas, romance novels, tabloid newspapers, reality television, and coming out narratives provide alternative ways to understand the relationship between paternal power and law from the bottom up. In this manner, constitutional discourse can begin to be transformed from a dreary parsing of scholarly and juristic argot into a vibrant discussion with points of access and understanding for all.

Contents: Series editor's preface; Introduction; A fine romance? Judicial restraint as a romance novel; Who's your Daddy? Judicial activism as a soap opera; Space aliens save country from ruin? Critical race theory as tabloid science fiction; Did the Supreme Court come out in Bush v. Gore? The instability of judicial identity; The drama of contemporary constitutional discourse: Lawrence v. Texas as a makeover of Bowers v. Hardwick; Conclusion; Bibliography; Index.

Susan Burgess is Professor of Political Science, and Professor of Women's Studies at Ohio University, USA. She has written widely on constitutional theory, as well as gender issues from a legal, and political perspective.

'Top, bottom, homosexuality, illegitimacy and more. Here all the stimulating issues surrounding queer theory enliven the traditional debates over authority for constitutional interpretation. This book is Susan Burgess at her path-breaking best. Like her earlier work and her professional contributions, The Founding Fathers, Pop Culture, and Constitutional Law is both fun and very important.' John Brigham, University of Massachusetts, Amherst, USA 'For nearly a decade, Susan Burgess has been producing some of the most provocative scholarship at the intersection of cultural studies, law, and politics. This book draws together and significantly extends her previous work. Interesting, insightful, and laugh-out-loud funny, The Founding Fathers, Pop Culture, and Constitutional Law: Who's Your Daddy? will change the way people think about old questions of legal power and judicial legitimacy.' Keith J. Bybee, Syracuse University, USA 'Engaging, witty, provocative, and, strongly persuasive, Burgess's argument marks out new territory for scholars of constitutional interpretation...[it is] required reading for all who study, celebrate, or critique the elemental sway that the Constitution and its authors exert over the American imagination.' CHOICE '...an immensely interesting and thought-provoking book that should be read by graduate students and scholars of constitutional law...' Law and Politics Book Review '...a must-read for those wishing to advance the cause of liberty free of the fetters of long-dead founding fathers, and for scholars in search of an original style of presentation to frame the argument.' Law Society Journal

The Founding Fathers, Pop Culture, and Constitutional Law: Who's Your Daddy?