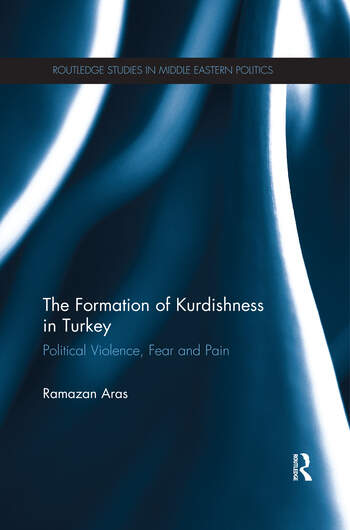 The Formation of Kurdishness in Turkey: Political Violence, Fear and Pain

The Formation of Kurdishness in Turkey examines political violence, the politics of fear and the Kurdish experience of pain through an analysis of life stories, personal narratives and testimonies of Kurdish subjects in contemporary Turkey. It traces the physical and psychological impacts of the war between the state security forces and the PKK (Kurdistan Workers’ Party) guerrillas in the last three decades, in Kurdish populated areas in the south-eastern part of Turkey.

Focusing on the instrumentalization of violence, the ensuing and manufactured culture of fear, gendered experiences of state violence, pain, incarceration, and corporeal punishment, Ramazan Aras argues that these phenomena have shaped contemporary Kurdish history and memory. Analysing occurrences of various forms of protracted state violence and fear not only as personal and differential markers experienced by individuals, but also as communally-felt phenomena which have engendered collective suffering, this book asserts that these traumatic experiences have marked the social body and produced a prevailing narrative of Kurdishness.

Providing an anthropological study of political violence, fear, and pain amongst the Kurdish community in Turkey, this book will be welcomed by students and scholars of Kurdish Studies, Middle East Studies and Anthropology.

Introduction: An Ethnography of Political Violence Among Kurds 1 The Modern Nation-State and Political Violence 2 A Genealogical Exploration of Kurdish Suffering in Turkey 3 The State and the Politics of Fear 4 A Nation in Pain: Gendered Suffering and Loss 5 The Embodiment of State Violence: Memories of  Incarceration and Corporeal Punishment Conclusion: the Making of Kurdish World(s)

Ramazan Aras is Associate Professor of Social and Cultural Anthropology at the Department of Sociology at Ibn Haldun University in Istanbul. He is also Founding Director of Center for Oral History and Social Memory Studies at IHU. He received his Ph.D. degree in Anthropology from the University of Western Ontario in February 2010. Previously, he has worked at the Departments of Anthropology at both Western University (Canada) and at Mardin Artuklu University (Turkey).  He is the author of Crossing Borders: Socio-cultural Anthropology and Interdisciplinary Approaches in Turkey (2014, in Turkish), Landmine and Smuggler: The Making and Unmaking Practices of Turkish-Syrian Border (2015, in Turkish). He has also published a number of peer-reviewed journal articles and book chapters on different issues in Turkey.

"Ramazan Aras has provided an important account of the attempt by Turkey to create a modern state out of the collapse of the Ottoman Empire. He documents in remarkable detail the political violence this has involved against the Kurds and the discourse of "security" by which their physical and psychological suffering, and the consequent breakup of their communities, has been legitimized by state authorities. Anyone wanting to understand the conflicts and repressions accompanying the formation of the modern secular state in the Middle East will find this book indispensible."
Talal Asad, Distinguished Prof. Emeritus, CUNY

"The strength of this book is that it gives a voice to those who were not active participants in the Kurdish movement and may even have grave reservations about its ideology and rejection of traditional values yet are profoundly influenced by it. The author is at pains to show that these people too are not passive victims of the dominant political forces but active political subjects, with agency in the making of Kurdishness."
Martin van Bruinessen, Emeritus Prof., Utrecht University

The Formation of Kurdishness in Turkey: Political Violence, Fear and Pain