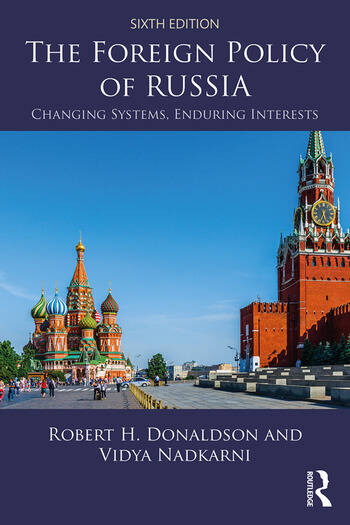 This text traces the lineage and development of Russian foreign policy with the insight that comes from a historical perspective. Now fully updated, the sixth edition incorporates new coverage of issues including relations with the major powers and with other post-communist states, with an emphasis on tensions with the U.S. and engagement with Ukraine, Crimea, and Syria. International security issues including arms control, sanctions, and intervention continue to grow in importance. Domestic and regional issues related to natural resource politics, human rights, Islamism and terrorism also persist. Chronologically organized chapters highlight the continuities of Russia’s behavior in the world since tsarist times as well as the major sources of change and variability over the revolutionary period, wartime alliances and Cold War, détente, the Soviet collapse, and the first post-communist decades. The basic framework used in the book is a modified realism that stresses the balance of power and the importance of national interest, and identifies several factors (both internal and external) that condition Russian policy. The interpretations are original and based on a mix of primary and secondary sources.

New to the Sixth Edition

Ch 6 Russia and the States of the Former Soviet Union

Ch 8 Russia and the "Non-West"

Ch 9 Putin’s Quest for Partnership in a Multipolar World

Ch 10 Russia and the United States: A New Cold War?

Robert H. Donaldson is Trustees Professor Emeritus of Political Science at the University of Tulsa. He was educated at Harvard University, and is past president of both the University of Tulsa and Fairleigh Dickinson University. He also has taught and held administrative positions at Lehman College of the City University of New York and Vanderbilt University, and served as International Affairs Fellow of the Council on Foreign Relations at the U.S. Department of State and as visiting research professor at the Strategic Studies Institute of the U.S. Army War College. Professor Donaldson has written extensively on Soviet and Russian politics and foreign policy and has authored or co-authored five other books.

is Professor of Political Science at the University of San Diego, where she has taught since 1990. She was educated at St. Xavier’s College, University of Mumbai, Jawaharlal Nehru University-New Delhi, and the University of British Columbia. Professor Nadkarni teaches courses in the area of international relations and foreign policy, and her research interests center on the foreign policies of resurgent (Russia) and aspiring (China, India) global powers. She is the author of Strategic Partnerships in Asia: Balancing without Alliances (2010) and co-editor of Emerging Powers in a Comparative Perspective: The Political and Economic Rise of the BRIC Countries (2012) and Challenge and Change: Global Threats and the State in the 21st Century (2016).

Praise for the Sixth Edition

The updated edition of this indispensable text offers students of politics and international relations, policy-makers, and the public a systematic, accessible, and even-handed discussion of Russian policy-making concerning relations with other states. Rooted by necessity in historical context from Tsarism up to early 2018, the book provides incisive, nuanced, and compelling analysis of changes and continuities in how Russian leaders perceive what is in their national interest and how they interpret and react to the actions of leaders elsewhere. Donaldson and Nadkarni offer a wise, timely contribution to debates about statecraft, soft power, pragmatism, East-West relations, and the role of cyber-crime.

Donaldson and Nadkarni’s text is the best around, encapsulating the best of American scholarship on Russia: It demonstrates a deep knowledge of Imperial, Soviet, and contemporary history, paired with a complex yet clear understanding of domestic realities’ role in foreign policy decision-making and implementation. The up-to-date sixth edition covers, for example, the Kremlin’s growing use of soft power and devotion to Eurasian (rather than European) economic integration. This book will be of great use to students, international relations professionals, and businesspeople interested in or implicated by Russian foreign policy.

The Foreign Policy of Russia is a sober and accessible analysis for both students and researchers. This a rare opportunity to get a full review of the origins, incentives, and challenges of Putin’s controversial foreign policy.