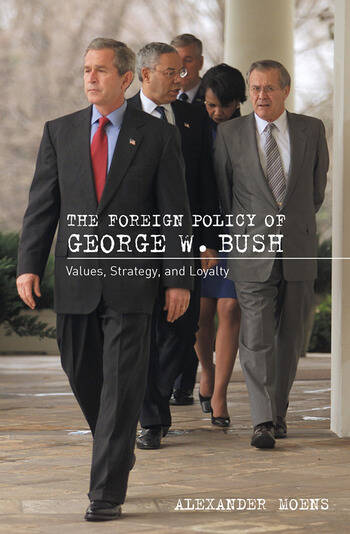 Few presidents in modern times have seen their words and actions subject to such intense critical scrutiny as George W. Bush. His critics label him the 'Pariah President', personally inarticulate and at times politically incoherent; his supporters portray him as gifted and skilled, one of the most decisive, successful and popular leaders of our time. But if 'the person is now the policy' at the White House - and that person happens to be both activist and moralist - what kind of presidency and foreign policy flows from such a leader? How has Bush changed American politics and the role of the United States in the world? Alexander Moens offers the first systematic explanation of Bush's foreign policy by describing the complexities of the man and how his particular personality and style so heavily influence the final policy outcomes. Frank, engaging and insightful, it offers an original and carefully documented account of Bush's personality, his presidential style and his decision-making process, and how these three core ingredients in turn provide the key to understanding Bush's overall strategy and policy. The Foreign Policy of George W. Bush is an ideal reference for contemporary US foreign policy, international security, and diplomatic relations. With detailed and candid insights into the presidential leadership it will also make fascinating reading for those interested in the future of American politics.

Contents: Introduction: a foreign policy of values, strategy, and loyalty; The background and personality of George W. Bush; Running for president; The Bush White House, the decision-making process, and the priority of domestic policy; Foreign and defense policy before September 11; The war president; The Iraq nexus; Bush's style, record and vision; Index.

'An important and comprehensive treatment of George W. Bush's foreign policy decision-making. Moens takes us well beyond journalistic accounts and those of the administration's critics by linking Bush's decisions to his personality, background, leadership style, and advisory network. The book is a "must read" for anyone seeking an in-depth understanding of this presidency...Moens forces the reader to grapple with any assumption that Bush's foreign policy decision-making can be easily dismissed as that of a "trigger happy" cowboy.' Professor John P. Burke, University of Vermont, USA 'Moens' clear, elegant writing style succeeds in providing a comprehensive, non-hysterical biography of President Bush that effectively illustrates how he views the world.' Dr John C. Hulsman, Senior Foreign Policy Analyst, The Heritage Foundation, USA 'Alexander Moens's book is an even-handed, dispassionate look at the real George [W.] Bush...Whatever the outcome, Alexander Moens has done a great service by exploring the personality, motives and record of the man who made the leap - and doing it without the usual Bush-bashing rhetoric.' Literary Review of Canada '...a welcome addition to the literature on the 43rd president...The depth of his research on President Bush is impressive...Moens' book will find a ready audience with those who are interested in foreign policy analysis and decision-making...Its focus on one of the most controversial and important presidents in recent history only makes it that much more valuable.' Millennium