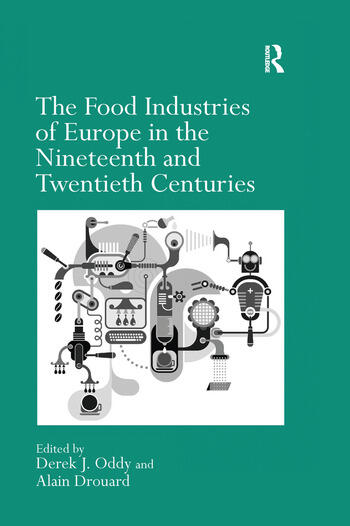 The Food Industries of Europe in the Nineteenth and Twentieth Centuries

The industrialization of food preservation and processing has been a dramatic development across Europe during modern times. This book sets out its story from the beginning of the nineteenth century when preservation of food from one harvest to another was essential to prevent hunger and even famine. Population growth and urbanization depended upon a break out from the ’biological ancien regime’ in which hunger was an ever-present threat. The application of mass production techniques by the food industries was essential to the modernization of Europe. From the mid-nineteenth century the development of food industries followed a marked regional pattern. After an initial growth in north-west Europe, the spread towards south-east Europe was slowed by social, cultural and political constraints. This was notable in the post-Second World War era. The picture of change in this volume is presented by case studies of countries ranging from the United Kingdom in the west to Romania in the east. All illustrate the role of food industries in creating new products that expanded the traditional cereal-based diet of pre-industrial Europe. Industrially preserved and processed foods provided new flavours and appetizing novelties which led to brand names recognized by consumers everywhere. Product marketing and advertising became fundamental to modern food retailing so that Europe’s largest food producers, Danone, Nestlé and Unilever, are numbered amongst the world’s biggest companies.

’This volume provides a compelling array of case studies on the evolution of the European food industry. What adds particular value and depth to the book are the discussions on the changing role of diet and technological innovation coupled with successful entrepreneurship in the creation of small companies, from which emerged some of the leading global food conglomerates.’ Jonathan Baker, University of Agder, Norway ’This book provides a fascinating account of the development of various food industries in Europe, from bread to chocolate, that have increased food availability, eliminating hunger and famines. But the huge variety of foods and products has led to new problems in nutrition - obesity, diabetes, lack of cooking skills, and the reduction of regional food patterns and use of whole foods.’ Catherine Geissler, King’s College London, UK ’An excellent interpretive commentary introducing this wide-ranging illuminating collection skilfully contextualizes fourteen diverse studies exploring national and thematic aspects of the transition from subsistence crises of the biological ancient regime to complex systems of food supply and distribution in the 20th century. Major themes include industrial and business organization, food product innovation, and the effect of new technology.’ Roy Church, University of East Anglia, UK 'One of the most innovative essays in the volume examines how packaging technology revolutionized the shopping environment in Sweden during the 1950s. Jenny Lee and Ulrika Torell trace the origins of Tetra Pak ...'. Journal of Historical Geography

The Food Industries of Europe in the Nineteenth and Twentieth Centuries